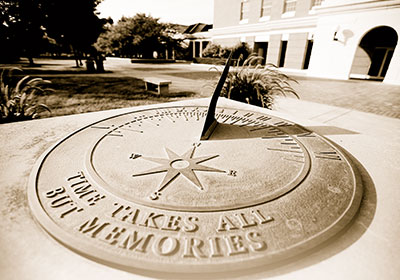 Bridgewater College will celebrate 138 years of its founding on Tuesday, April 3, and will present three awards during the 11:15 a.m. convocation in Nininger Hall.

Bridgewater College will celebrate 138 years of its founding on Tuesday, April 3, and will present three awards during the 11:15 a.m. convocation in Nininger Hall.

The Founder’s Day observance at Bridgewater commemorates the April 3, 1854, birth of Daniel Christian Flory who, at the age of 26, began a new school at Spring Creek in Rockingham County in 1880. The school, first known as Spring Creek Normal School, moved to Bridgewater two years later and changed its name to Bridgewater College on July 12, 1889.

The college’s observance of Founder’s Day began in 1920.

Dr. Scott W. Cole earned his bachelor’s degree from Colby College in Waterville, Maine, his master’s from Brown University in Providence, R.I., and his doctorate from the University of Washington in Seattle, Wash. He has been the director of the theater program at Bridgewater College since 2005 and has been instrumental in the recent addition of the theater major to the college’s offerings.

While at Bridgewater, Dr. Cole has directed more than 25 theater productions that have ranged from Greek tragedy to contemporary drama. His work has been recognized by the Kennedy Center American College Theater Festival (KCACTF), where he has earned KCACTF regional awards for Agamemnon and The Green Bird. Bridgewater’s production of A Dream Play in 2011 earned one of KCACTF’s eight national awards for Best Production and Production Ensemble. Dr. Cole’s direction of the premiere production of This Too Comes By Hard at the Washington, D.C., Capital Fringe Festival was voted Best of the Fringe in 2017.

“I think that the passion and excitement that I have for theater led me to want to share that passion with others. My goal is to get everyone as excited about theater as I am,” he said.

Dr. Cole said he loves teaching and can’t imagine doing anything else.

Dr. Cole has lived all over the world and now calls the Shenandoah Valley home.  He lives in Bridgewater with his wife, Holly Labbe, and their three children, Ada, Wyatt and Eli.

The Ben and Janice Wade Outstanding Teaching Award is conferred annually upon the Bridgewater College classroom teacher who has demonstrated outstanding classroom teaching performance, the encouragement of which was a priority of Dr. Wade during his tenure (1979-85) as Bridgewater’s executive assistant to the president, provost and professor of religion.

Dr. Lassiter received a bachelor of science degree in health and exercise science from Wake Forest University in 2000, followed by an M.S. in health education from the College at Brockport, State University of New York in 2002. In 2008, she earned her Ed.D. in health policy and health education from D’Youville College in Buffalo, N.Y. She became a Certified Athletic Trainer (ATC) in 2001 and a Certified Health Education Specialist in 2009.

While working on her doctorate, she was part of the associate faculty at the College at Brockport from 2002-2009, teaching courses in the Department of Health Science. In 2009, Dr. Lassiter came to Bridgewater College. She teaches courses such as Health Promotion, Personal and Community Health, Implementing Health Programs, School Health and the college’s first-year seminar, Critical Inquiry in the Liberal Arts.

As a health educator, Dr. Lassiter appreciates the value of all aspects of teaching and involvement with students outside the classroom.

“In health education we recognize that knowledge alone rarely changes behavior, and I think that is true for the growth of our students as well,” she said.

She is active on numerous college committees and served as the coordinator for the college’s peer-led alcohol abuse prevention program from 2011-2017, which resulted from an NCAA Choices Grant in 2011.

She has published and presented extensively in her field and is involved in the local community, including as a board member and volunteer at Our Community Place (OCP), a community center in Harrisonburg, Va., that focuses on outreach to the homeless. She was recognized in 2012 as a Daily Points of Light Award recipient for her work at OCP, both as an individual and for the way she engages her students in the community.

“Any time I get to be a part of those student experiences, whether though simply listening to a story or by facilitating the experience itself, I have an opportunity to be part of that student’s growth, and my own too,” said Dr. Lassiter. “That is a privilege and a joy and I couldn’t imagine teaching any other way.”

Dr. Stanley A. Galloway grew up in a small town overlooking the Columbia River in Washington.

His education sent him progressively east, first to Idaho, where he received his B.A. in English from Northwest Nazarene College (1981), then to Kansas where he earned his M.A. from Kansas State University (1983), then a Ph.D. from the University of Kansas (1993). Between the latter two degrees he taught in various colleges in Ohio, Missouri, and Kansas. Upon his completion of the Ph.D., he brought his family to Bridgewater, where he is now completing 25 years. He has three sons living in Bridgewater and Harrisonburg and one grandchild.

Dr. Galloway’s degrees in English reflect his love of creation. His M.A. carried a playwriting emphasis and his Ph.D. employed a creative dissertation including a science fiction novel, completed under award-winning author James Gunn. After moving to Bridgewater, Dr. Galloway continued to write. He wrote a book of literary criticism aimed at the public library market entitled The Teenage Tarzan (2010); James Gunn hailed Dr. Galloway as “one of the half-dozen finest Burroughs scholars in the world.”

Dr. Galloway’s background in science fiction and the study of literature synthesized into a book that was both a commentary on literary insights of Tarzan, a major cultural phenomenon, and a demonstration of critical thinking for beginning writers. In the final stages of writing that book, he began to market his poetry, not ready to commit to a longer project while the previous one still needed attention.

His love of poetry blossomed and he began a serious pursuit of that genre, which he continues to refine. To date, he has published more than 100 poems, including one full-length collection, Just Married (2013), and three chapbooks: Abraham (2012), A Bird’s Life (2012), and Rhapsody in Blues (2016).

Growing out of sabbatical work in 2012, Dr. Galloway launched the Bridgewater International Poetry Festival in January 2013. He continued that project in 2015 and 2017. The festival draws nearly 100 poets from around the world to the Bridgewater campus. Galloway edits and/or oversees an anthology of poetry from each of these events.

“Bridgewater College has been very supportive of my writing and research, allowing me opportunities that I would never have pursued without its encouragement and financial support,” said Galloway.