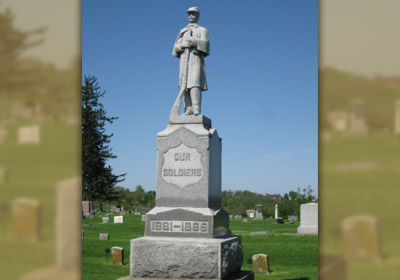 How the Civil War and the people who fought it have been remembered in monuments is the topic of the 11th-Annual Bridgewater College Civil War Institute, to be held Saturday, March17.

How the Civil War and the people who fought it have been remembered in monuments is the topic of the 11th-Annual Bridgewater College Civil War Institute, to be held Saturday, March 17 from 9 a.m. until 4 p.m.

The one-day institute, which is free and open to the public, will be in the Spoerlein Lecture Hall (Room 100) of the college’s McKinney Center for Science and Mathematics.

Exploring the theme of “Civil War Monuments: Past, Present and Future” are:

Christy Coleman, CEO of the American Civil War Museum in Richmond, Va. The topic of her talk, “How Shall We Remember?,” will explore the conversations that are being held about Civil War statues, particularly those commemorating Confederates and the Southern cause, and will touch on why they are more controversial in some communities than in others.

Jonathan Noyalas, director of the McCormick Civil War Institute at Shenandoah University and the author of 11 books. Noyalas will speak on “The Broader and Purer Purpose: The Shenandoah Valley’s Monuments, Battlefield Landscapes and Civil War Memory.” His talk will examine how Union and Confederate veterans reacted to battlefield excursions in the postwar period, the placement of monuments on those battlefields, and the various lessons the Shenandoah Valley’s commemorative landscape could offer not only to the generation who fought during the Civil War, but future generations.

Dr. David Ehrenpreis, director of the Institute for Visual Studies and professor of art history at James Madison University. Ehrenpreis’ topic, “Facing History: The Place of Confederate Monuments in the 21st Century,” will focus on the question of what to do with monuments to the South, and are there ways to preserve them in controversial times.

“We are experiencing a national debate regarding monuments to the Confederacy, as they invoke vastly different emotions and interpretations to many individuals,” said Nick Picerno, co-founder of the Institute. “With the assistance of these well-respected historians we will examine that controversy in the past, the present and the future.”