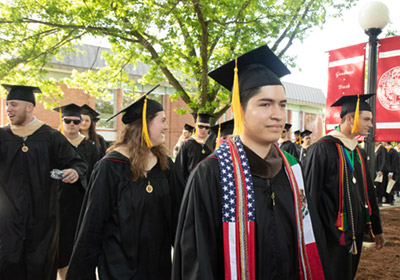 Bridgewater College graduated 400 students at the College’s 139th Commencement exercises on Saturday, May 4, including the College’s first master’s degree recipients.

As hundreds of Bridgewater College graduates and their families gathered on the campus mall Saturday, May 4, for the College’s 139th Commencement exercises, speaker R. Mark Laursen urged the 400 graduates to determine what makes them come alive, and then to pursue that passion.

Speaking at Bridgewater College was especially significant for Laursen, whose father worked and coached at Warren Wilson College, a liberal arts college in Asheville, N.C. The foundation of a liberal arts education in educating the whole person and empowering them to be purposeful and ethical in life produces graduates who make our country—and world—better, Laursen said.

Laursen serves as clinical associate professor in Boston University’s Sargent College of Health and Rehabilitation Services as well as director of Athletic Training Services. His 30-year career has been focused on aiding athletes on both a collegiate and professional level, as well as teaching and guiding future athletic trainers at several colleges and universities.

“I can think of no better profession than athletic training,” Laursen said, specifically addressing the six master of science in athletic training graduates, Bridgewater’s first master’s graduates. “You are lucky to have been developed into health care professionals at this type of college. Your education will prepare you to serve your patients well and will prepare you to be a patient-centered provider that our health care system so desperately needs.”

In his address, titled “What Makes You ‘Be Alive,’” Laursen shared his own journey in finding what brings him true fulfillment: being a servant to others. He also told of hardships he has had to overcome, including volunteering at the 2013 Boston Marathon, during which terrorists detonated two bombs at the finish line, killing three people and wounding hundreds more. Laursen says he witnessed acts of unbelievable courage that day that forever changed him.