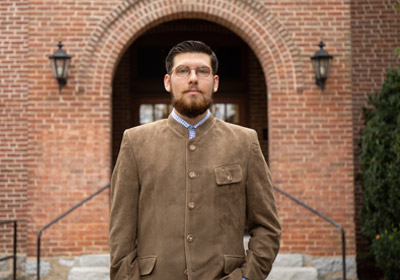 Joshua Stein ’19 has always been drawn to history as a form of storytelling—about people, places and our collective memories. A summer TREB project allowed him to become immersed in a U.S. Army veteran’s life.

History is a way of telling—and learning—someone’s story. Where they’re from, how they speak, what their day-to-day life is like. All of these things are woven together to create the tapestry of one’s life. Joshua Stein ’19 has always been drawn to history, but as a first-year student at Bridgewater College he decided to major in biology, with a focus on forensic pathology. One appeal was that the field still touched upon his love of history—of telling someone’s story who was not there.

Dr. Edgar Lickey, Associate Professor of Biology, recognized Stein’s propensity for the history side of the science and suggested he switch majors, “where you belong.”

As a history major at the start of his sophomore year, Stein took classes with Dr. Martin Kalb, Assistant Professor of History and Political Science, first modern history and then a modern German history class. And that was the class that changed everything, according to Stein, who initially thought he was more interested in American and Civil War history.

Stein’s mother’s side of the family is from Germany, and part of his interest in the class was to learn more about his family’s history and culture. Since then he has visited Germany twice and has also taken German language classes with Bridgewater’s Geraldine Suter, Instructor of World Languages.

In 2018, Stein and Kalb collaborated on a summer research project, “Memories of John Stenger’s War.” Through The Research Experience @ Bridgewater (TREB), students and faculty work side-by-side on projects, and the students receive a stipend and free on-campus housing during their research.

Stenger, a decorated U.S. Army veteran who served with the 104th Infantry “Timberwolf” division on the German front during World War II, was awarded the Purple Heart and Bronze Star, among other honors. Stenger’s son, Jack ’75, donated the collection of his late father’s war materials and memorabilia to the college, including letters between Stenger and his future wife, Ayleen Miller; newspapers; military forms; photographs; medals; German materials Stenger collected and more. The collection, The John Stenger 104th Infantry (Timberwolf) Division WII materials, 1942–1999, bulk 1942–1946, is also linked to an endowed scholarship in Stenger’s honor. Jack Stenger made the donation to Bridgewater College Special Collections in January 2018.

For the TREB project, Stein and Kalb spent the summer taking inventory of, researching and interpreting the collection, with the goal of sharing the materials with a broader audience. Stein also created a website called “Memories of Love and War,” and he presented on the project during the College’s ASPIRE (A Celebration of the Arts, Scholarship, Performance, Innovation and Research Excellence) program in April.

The first thing Stein did for the research project was sort through the many boxes to take inventory of what had been donated. There were also bags and bags of letters written between Stenger and his girlfriend, Ayleen, from August 1944 to January 1945. The couple wrote 100-plus letters detailing their thoughts and hopes for the future. In one, Stenger lists everything he wants to do when he returns home from the war, including marrying Ayleen. A letter Stenger sent the day after the Battle of the Bulge says he’s glad the couple waited to get married. Stein said reading that sent chills down his back.

The German history method of alltagsgeschichte translates to “the history of everyday life.” Looking closely at an individual, and at their day-to-day existence, can reveal the larger picture. After sorting through the primary sources in the collection, Stein visited Akron, Ohio, Stenger’s hometown, including a stop at the original Firestone plant where Stenger worked before the war. (Stenger enjoyed a long career in the rubber industry, eventually serving as Vice President at Baird Rubber & Trading in New York City.) Stein also visited the local library and collected newspaper clippings related to Stenger. He even looked through family photos with Stenger’s granddaughter, Heidi.

“I did everything I could to put together all the pieces to get a full person,” Stein said. “He’s witty with how he talks [in his letters] and just seems like an all-around good person. It’s weird knowing someone I’ve never met.”

Stenger’s mother’s scrapbook is part of the collection. In it are telegrams from the Army with chilling declarations such as “Your son was wounded” and “Your son is missing.” Both Stenger and his twin brother, Charlie, served in the war and were deemed missing at various times. Charlie, who was a medic in the Army, was captured as a prisoner of war during the Battle of the Bulge, and was released at the end of the war. Charles Stenger went on to become a doctor. There are two telegrams in the scrapbook, one for each brother, that state: “Your son has been found.”

Stein will graduate May 4 with a bachelor of arts in history and a minor in American studies. He served as class president as a first-year student, sophomore and junior, and was elected student body president his senior year. As student body president he’s helped bring more fiscal transparency to the executive board by reestablishing the Finance Committee in the Student Senate, which oversees campus concerns, safety issues and funding requests from clubs.

Running for a class officer position as a first-year student helped him become involved and to meet new people, Stein said. That’s one of the things he likes about Bridgewater—the friendliness on campus among students as well as the accessibility of faculty members.

“I’m proud of the relationships I’ve built with the faculty,” Stein said. “I feel like I wouldn’t have been able to do that elsewhere. And also the relationships with other students—it’s such a close-knit community.”

At Bridgewater, Stein was also a member of the Philomathes Society (the College’s scholastic honors society), chair of the Safety and Community Wellness Committee and member of the Student Life Advisory Committee and the Safety and Security Group. Stein was also awarded a Philomathes Graduate School Scholarship. Following graduation, he will pursue a master’s degree in history at Virginia Commonwealth University. His long-term goal is to become a history professor.

The materials in this collection are available to researchers by appointment in Bridgewater College Special Collections. For more information, contact Stephanie Gardner at sgardner@bridgewater.edu or 540-828-8018.