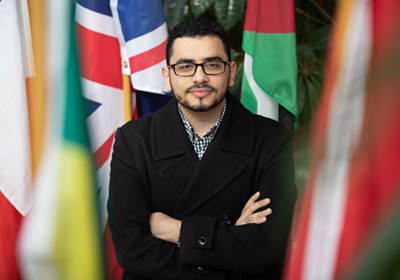 Bridgewater College junior political science and economics double major Iyad Hmidat was named a Newman Civic Fellow by Boston-based Campus Compact. The nonprofit organization recently announced the 262 students selected as the 2019-20 cohort of fellows who have demonstrated a capacity for leadership and an investment in solving public problems. As part of the prestigious fellowship, the students will embark on a one-year experience, from September 2019 to May 2020, that emphasizes personal, professional and civic growth via networking opportunities.

Hmidat was nominated for the fellowship by Bridgewater College President Dr. David Bushman, who wrote in his nomination letter that Hmidat “is known as a reliable and thoughtful student throughout campus, serving the College and surrounding community in myriad ways.” Dr. Bushman wrote that a few highlights of Hmidat’s engagement with and commitment to civic service and social change include active representation in the Muslim community throughout the Shenandoah Valley, regional outreach to area middle schools, and developing and implementing training for students in debate and public speaking. In addition, Hmidat founded the Muslim Student Association at Bridgewater College and cofounded the College’s Model United Nations. In less formal ways, Dr. Bushman said Hmidat encourages dialogues on topics such as student governance, social justice, and inclusion and education on contemporary global issues such as the Israeli-Palestinian conflict.

Hmidat has been interested in civil discourse all of his life. Originally from Palestine, his family members were split between two political parties but always treated one another with respect. After moving to the United States, Hmidat modeled that reverence for civic discourse by planning roundtable discussions on political issues at his high school. Hmidat said he was motivated to form the Muslim Student Association at Bridgewater because some students were misinformed about Islam and its beliefs.

“Since then, I have been committed to promoting dialogues and conversations between students from various backgrounds, as it is difficult for democracy to function when we lack understanding of each other,” Hmidat wrote in his personal statement in the fellowship application.

The fellowship provides a variety of learning and networking opportunities, including a national conference of Newman Civic Fellows in partnership with the Edward M. Kennedy Institute for the United States Senate. It also provides fellows with access to apply for exclusive scholarship and post-graduate opportunities.