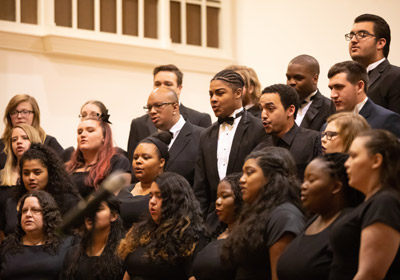 Bridgewater College’s Concert Choir, Chorale and Handbell Choir will present a spring concert April 5, as part of ASPIRE (A Celebration of the Arts, Scholarship, Performance, Innovation and Research Excellence).

Bridgewater College’s Concert Choir, Chorale and Handbell Choir will present a concert at 7:30 p.m. Friday, April 5, in the Concert Hall in the Carter Center for Worship and Music, as part of ASPIRE (A Celebration of the Arts, Scholarship, Performance, Innovation and Research Excellence). ASPIRE events will be held April 5-23.

The Concert Choir and Chorale are under the direction of Curtis Nolley, a 1976 graduate of Bridgewater College and visiting director of choral music. Lacey Johnson, a 2007 graduate and instructor of music, will accompany on the piano.

The concert will feature choral classics, including selections from William Byrd’s Mass for Four Voices and Josef Haydn’s “The Heavens are Telling” from The Creation. Also featured will be contemporary composers Paul Basler and Kinley Lange, along with new and traditional settings of African American spirituals.

The student-led Handbell Choir is under the co-direction of Jenna K. Hallock, a senior psychology and music double major, from Frederick, Md., and Noah Flint, a sophomore music major, from Rocky Mount, Va.

The Handbell Choir will present a variety of contemporary and traditional arrangements.