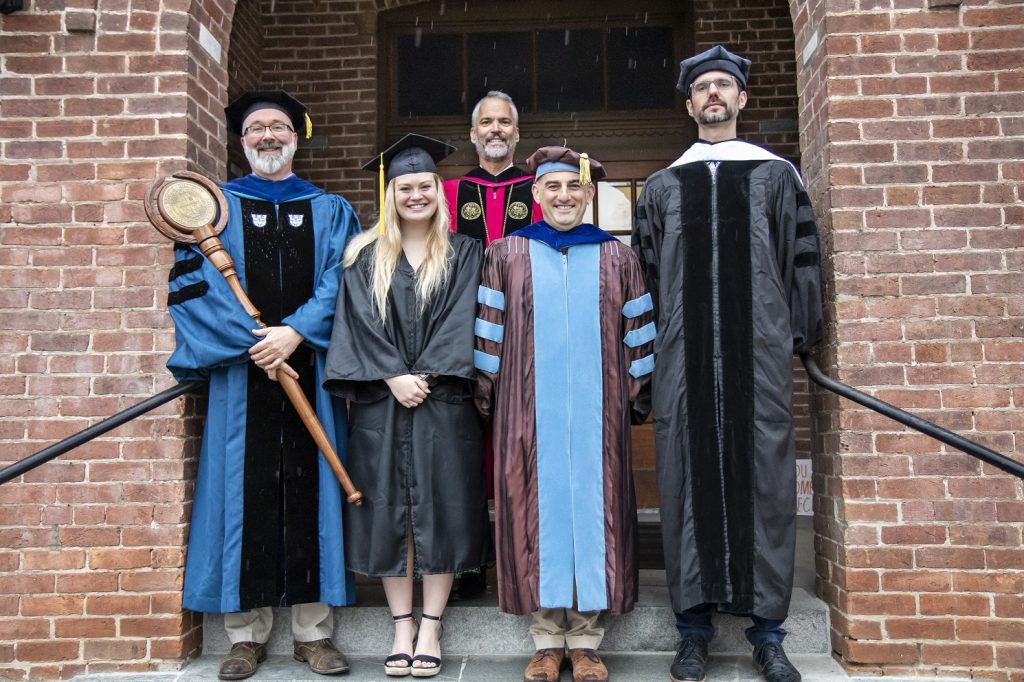 Bridgewater College marked its observance of Founder’s Day on Tuesday, April 5, and presented awards to three faculty members for their excellence in teaching and scholarship, two members of the campus police and safety department for their sacrifice and one student for academic excellence.

“The occasion of Founder’s Day is meant to celebrate connections to our history and mission—to the connections between our past and future—the ever-present reality of a journey shared together. Founder’s Day is meant to remind us of our connections to each other both while we’re here and long after we leave this campus,” BC President Dr. David Bushman remarked at the ceremony in Nininger Hall. “We are part of a long tradition and represent simply the most recent links in a chain that goes back nearly a century and a half here at Bridgewater College. We are the connection between our past and our future. We celebrate the importance and meaning of those connections today.”

Department Chair since 2017, Dr. Sheridan has taught at Bridgewater College since 2008 and was promoted to Associate Professor in 2013. He earned a B.A. from Williams College and his M.A. and Ph.D. from Tufts University. The Martha B. Thornton Faculty Recognition Award recognizes faculty who “provide caring concern for students well beyond the role as teacher.”

Dr. Albers has been at Bridgewater College since 2008 and was promoted to Associate Professor in 2014. He has served as Department Chair since 2019. He earned a B.A. from Kenyon College and his M.A. and Ph.D. from Duke University.

The Ben and Janice Wade Outstanding Teaching Award is conferred annually upon the Bridgewater College classroom teacher who has demonstrated outstanding classroom teaching performance, the encouragement of which was a priority of Dr. Wade during his tenure (1979-85) as Bridgewater’s executive assistant to the president, provost and professor of religion.

Dr. Kalb has taught at Bridgewater College since 2015 and was promoted to Associate Professor in 2021. He earned his M.A. from the Friedrich-Alexander University Erlangen in Germany and his Ph.D. from Northern Arizona University. The Faculty Scholarship Award recognizes a faculty member for his or her “established record of scholarly achievement.”

Officer Jefferson died in the line of duty protecting the Bridgewater College community on Feb. 1, 2022. He joined the Bridgewater College Campus Police and Safety Department in August 2018. His law enforcement career began in 1997 as a patrol officer with the Fairfax County Sheriff’s Office before serving as a National Reconnaissance Officer in Chantilly, Va., from 1999-2011. Prior to joining BC, Officer Jefferson served as a sergeant with Shenandoah University Department of Public Safety. During his time at Shenandoah, he was recognized for his exemplary work with the James R. and Mary B. Wilkins Appreciation Award in 2017. Officer Jefferson was a U.S. Marine Corps veteran.

Officer Painter died in the line of duty protecting the Bridgewater College community on Feb. 1, 2022. He joined the Bridgewater College Campus Police and Safety Department in May 2019. His law enforcement career began in 1989 as a deputy sheriff in King George, Va. Prior to joining BC, Officer Painter retired as chief of the Grottoes Police Department in 2018 after 18 years in the department. He served in the U.S. Air Force from 1985-1988 and as an intelligence analyst in the U.S. Army National Guard from 1999-2000.

The Daniel Christian Flory Award recognizes “the staff member(s) who made the most outstanding contribution to fulfilling the mission of Bridgewater College.”

Eye, from Fredericksburg, Va., is a senior double majoring in health and exercise science and sociology. She is actively involved on campus as a SOAR mentor, academic coach and Resident Advisor and also serves as a tutor and teacher’s assistant for human anatomy. In addition, she interns with the Office of Academic Support and Disability Services. She is also the 2022 Zygmunt Bauman Scholar Award recipient for the Department of Sociology.