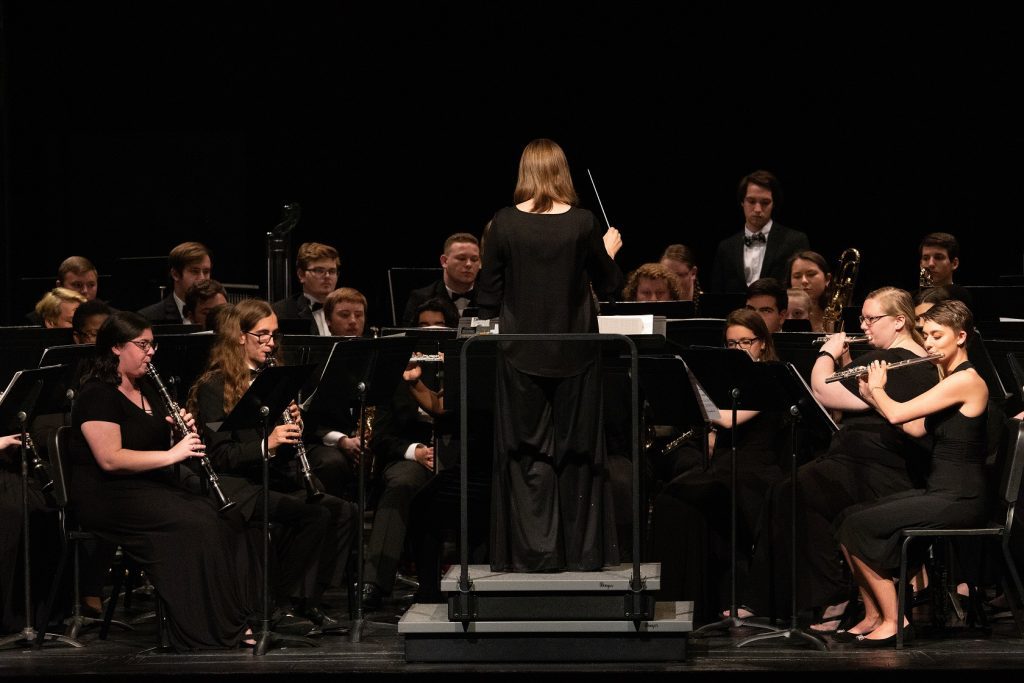 Bridgewater College’s Symphonic Band, under the direction of Dr. Christine Carrillo, will perform on Sunday, March 27, at 3 p.m. in Cole Hall on the College’s campus.

The concert is a donation-optional benefit event supporting the Screamin’ Eagles Marching Band with a challenge gift from Judy Nolen Henneberger ’64 to help defray students’ costs as they participate in the London New Year’s Day Parade 2023. The Screamin’ Eagles were invited to participate in the event—the biggest New Year’s Day street event of its kind—that is watched by millions of television viewers across the world.

Henneberger will match dollar-for-dollar, up to $10,000, of donations made at the Symphonic Band concert. For those who cannot attend the concert, donations can be made at bridgewater.edu/give with a designation for “Screamin’ Eagles London Trip.” Each gift will directly help reduce the overall cost so that every Screamin’ Eagles Marching Band member can participate in the once-in-a-lifetime experience.

“The Screamin’ Eagles has had a tremendous impact on the College since its inception one year ago. This trip, along with our successful first year, has generated great interest in BC and our music program. Judy’s support, along with our community, will ensure that current Eagles can participate in the trip,” said Barry Flowe, Bridgewater College’s Director of Athletic Bands.

Sunday’s concert will open with “Sun Dance” by Frank Ticheli, followed by “Perthshire Majesty” by Samuel R. Hazo. The program will continue with a consortium premiere performance of “Let Me Be Frank With You” by John Mackey.

The band will then perform “When Peace Like a River” composed by Gary Fagan ’73 in memory of Bridgewater College officers John Painter and Vashon “J.J.” Jefferson who lost their lives while protecting the campus community on Feb. 1. Fagan, an accomplished music educator and composer, was a member of the Bridgewater College band and was the president of the band from 1972-1973.

“As soon as I decided to arrange the piece in their memory, I knew that the band that should premiere the piece had to be the Bridgewater Symphonic Band. This particular hymn seemed very appropriate as the basis for the piece due to the circumstances in which it was originally composed and the message the text emphasizes. The text speaks to the fact that even when tragedy occurs, we keep our faith and find strength in God. It is a hymn of hope and encouragement even in the darkest of times,” Fagan said.

Following that piece, the band will perform “Shenandoah” arranged by Omar Thomas and “Paper Cut” by Alex Shapiro. The program will conclude with “Crush” by Robert W. Smith.

The performance is free and open to the public.

AT A GLANCE
BC Symphonic Band
When: 3 p.m. Sunday, March 27, 2022
Where: Cole Hall, Bridgewater College’s campus
Note: This concert is a donation-optional event supporting the Screamin’ Eagles Marching Band. Judy Nolen Henneberger ’64 has generously provided a challenge gift and will match dollar-for-dollar (up to $10,000) of donations received. Funds will directly support the Screamin’ Eagles’ trip to the London New Year’s Day Parade 2023, where they have been invited to perform.