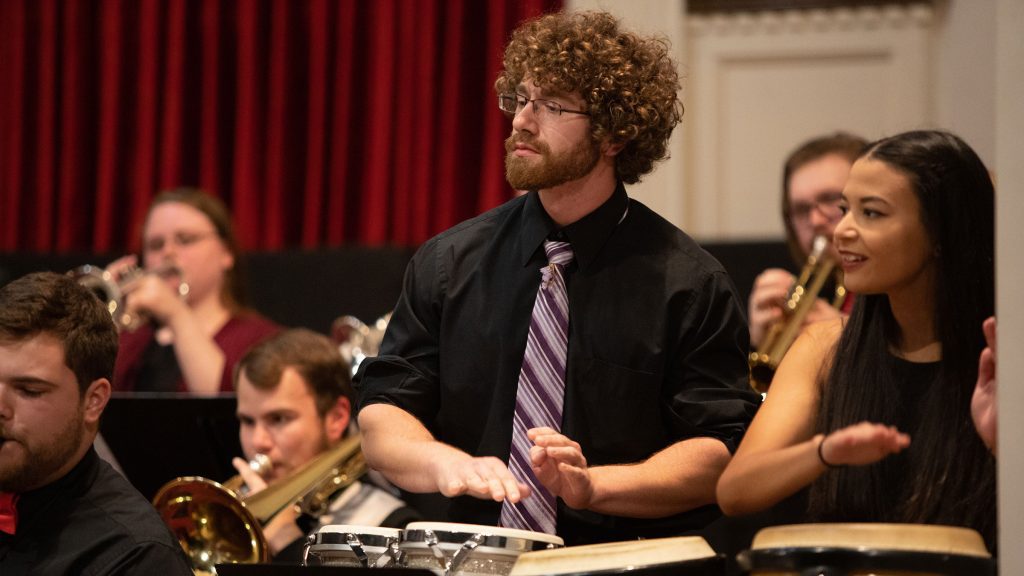 Bridgewater College’s Jazz Ensemble, Chorale, a jazz band featuring alumni from 1982 to 2022, and a newly formed chamber ensemble, Meridiane, will perform on Saturday, Oct. 22, at 7:30 p.m. in the Concert Hall of the Carter Center for Worship and Music during the annual Homecoming Concert.

The concert will begin with the Meridiane Ensemble and Chorale, under the direction of Assistant Professor of Music Dr. Ryan Keebaugh. Meridiane is the newest vocal chamber ensemble at BC with a mission to establish the performance of culturally relevant programs of contemporary composers. Meridiane’s founding members—Sarah Henneberger ’24, Abby Nester ’25, Leisha Nissley ’23, Jordie Roberts ’25, Parker Sale ’25 and Hannah Simmers ’25—will perform “Svatba,” a traditional Bulgarian folk song, and “I Lie” by David Lang.

The Chorale, accompanied on piano by adjunct music instructor Amy Robertson, will follow with “Flight Song” by Kim André Arnesen, “Evening Prayer” by Ola Gjeilo and “Walk Together Children” by Moses Hogan. Adjunct instructor of music Anthony Cincotta II will join the Chorale on tenor saxophone for “Evening Prayer.”

Luke Cronin ’23, a music major from Lovettsville, Va., on trumpet

Conrad Krytusa ’23, a music major from Aldie, Va., on trombone

Ortez Marshman ’24, a communication, technology and culture major from Washington, D.C., on trombone

Wyatt Smith ’23, a music major from Bridgewater, Va., on trumpet

AT A GLANCE
Homecoming Concert
When: Saturday, Oct. 22, 7:30 p.m.
Where: Concert Hall, Carter Center for Worship and Music
Cost: Free and open to the public.