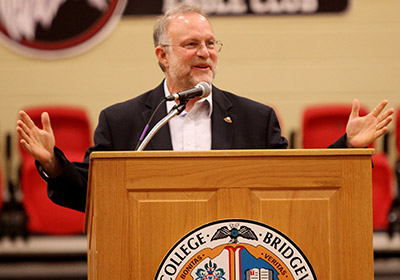 On April 16, Jerry Greenfield spoke to a full gymnasium of students, community members, faculty and staff in Nininger Hall.

On April 16, Jerry Greenfield spoke to a full gymnasium of students, community members, faculty and staff in Nininger Hall.

Titled “An Evening of Entrepreneurial Spirit, Social Responsibility and Radical Business Philosophy,” Greenfield’s lecture described his experience of building a business with Cohen from the ground up, while highlighting their unconventional yet admirable business practices.

Sick of working as a lab technician, Greenfield decided to work with Cohen to fulfill their dream of running a food business together. After taking a five dollar correspondence course on ice cream making at Penn State University and saving a few thousand dollars, the two friends moved to Burlington, Vermont to open shop.

Since Vermont winters are very cold, business would always go down during the winter. Some solutions included promotions that lowered the price of ice cream as the temperatures lowered and selling ice cream from an ice cream truck. Cohen then came up with the idea of selling pints of ice cream to other businesses to carry and sell, and  “that’s how Ben & Jerry’s stumbled into the ice cream manufacturing distribution business,” said Greenfield.

Ben & Jerry’s began selling to bigger distributers, and one day, those distributers told them that Häagen Dazs, owned by Pillsbury, threatened to leave the distributers if they didn’t stop distributing Ben & Jerry’s. It was at this moment that Greenfield and Cohen realized that by being perceived as a threat, they were making an impact in the industry. In response, the two founders created a campaign called, “What’s the Dough Boy Afraid Of?”

The campaign put Ben & Jerry’s on the map, and Greenfield recalled almost wanting to get out of the business because he didn’t want to be a part of a business that was “just like all the other big businesses.” Instead of getting out, Greenfield and Cohen decided to make a change. Greenfield believes that “businesses should address environmental and social issues,” as well as serving the community, and that is exactly what the two partners shifted toward with Ben & Jerry’s.

By addressing those issues, Ben & Jerry’s created “power in business,” Greenfield explained. Additionally, the business began supporting environmentally friendly and socially conscious organizations and stopped using any genetically modified organisms (GMOs) as ingredients. Accused of only doing good things as a front to sell ice cream, Greenfield responded by saying, “Our actions are based on deeply held values.” Concluding his lecture, Greenfield said, “There’s a spiritual aspect to business. As you give, you receive.”

Following the convocation, Greenfield showed the generous spirit of Ben & Jerry’s by having free samples of ice cream available to give out to everyone in attendance.