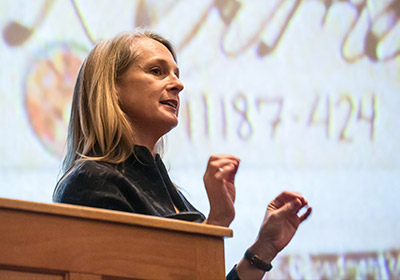 On Feb. 12, Piper Kerman spoke to a full house of students, faculty, staff and community members in Cole Hall.

On Feb. 12, Piper Kerman spoke to a full house of students, faculty, staff and community members in Cole Hall.

Kerman began her lecture by recalling her college graduation from Smith College, a small liberal arts college for women, in 1992, recognizing her alma mater’s similarities with Bridgewater College.

Following her graduation, Kerman followed an “older, worldly woman” around the world, while this older woman was involved with drug trafficking. Kerman managed to stay uninvolved until, one day, her lover asked her to carry $10,000 from Chicago to Brussels.

Although she slowly put her past behind her and started a new life in New York City, Kerman was shocked to later find two U.S. Customs Officers summoning her to court for a crime that she had committed years past. She said, “The consequences of our actions always come back to us in one way or another.” She also described this time as the start of her “journey through the American criminal justice system.”

After turning herself in on a cold February day at Danbury Correctional Facility, Kerman received the last thing she expected: “kindness at the hands of the other prisoners.” Kerman spoke highly of her fellow inmates, as they welcomed her and continued to make her feel as safe as she could. Kerman was released in 2005 and later went on to write her memoir. She hoped that her memoir would make readers come away with a different idea about the people who are in prison and why they are there.

Orange is the New Black: My Year in a Women’s Prison focuses on three important themes that Kerman hoped her readers would understand and become interested in: race and class, gender and power, and friendship and empathy. Despite being in the “worst place [she’s] ever been in [her] life,” she was able to find meaning and learn various life lessons during her incarceration.

Kerman showed a clip from the first episode of the Netflix series of the same name and explained that the scene effectively showed the themes that she considered most important in her memoir. “The result is something I’m very grateful for and very proud of,” Kerman said.

Kerman concluded her lecture by showing a picture of various institutions that “make communities vibrant,” using Bridgewater College as one example. She emphasized that when communities lack good institutions, people may resort to making poor decisions. Kerman left the audience with one final piece of encouragement, “Advocate long and hard for the institutions that make us happy.”