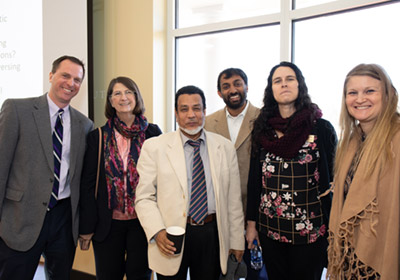 Delegations from two international universities and Shenandoah University visited Bridgewater College’s campus to kick off the Barzinji Project, which promotes the exploration of issues in higher education across cultures.

Shenandoah invited Bridgewater to participate in the pilot program in which the delegations made up of two faculty members, two staff members and two students from each school will visit one another’s campuses to learn more about how that institution approaches issues surrounding higher education in a range of political, cultural and economic environments. The delegations from IIUM and the University of Sarajevo will visit Bridgewater’s campus through Tuesday, followed by a visit to Shenandoah’s campus Wednesday and Thursday. The Bridgewater and Shenandoah delegations will travel to IIUM and the University of Sarajevo in March. The goal is for the program to become permanent, and to expand to include eight Virginia Foundation of Independent Colleges (VFIC) members each year that would be paired with a leading international institution from a Muslim majority society worldwide.

“We believe in this idea of synergy and cross-cultural understanding, which will lead to creativity and innovation in higher education,” said project director Dr. Younus Mirza, a scholar-in-residence at Shenandoah.

Bridgewater College President Dr. David Bushman welcomed all three delegations at breakfast in the Wampler President’s Suite in Nininger Hall, and noted that the notion of civil discourse and dialogue as fundamental underpinnings to democracy is inherent in the College’s DNA. The theme for this year’s Barzinji Project is “The role of the university in civil discourse.”

Following introductions from each participant, delegation representatives from IIUM and the University of Sarajevo presented gifts to Bushman and Bridgewater’s Dr. Jamie Frueh, professor of global politics, director of the Center for Engaged Learning and Barzinji Project Steering Committee member. (Bridgewater College presented each delegation member with a gift bag at the start of the day.) Dr. Hamzeh Salleh, Dean of the International Institute for Halal Research and Training at IIUM, presented Bushman with a three-volume reference book, Natural Science from the Worldview of the Quran, as well as pamphlets and prospectuses about IIUM. Dr. Dženana Husremović, Vice Rector for science research at the University of Sarajevo, gave Bushman a wooden box containing a Flower of Srebrenica, which is a symbol of remembrance of the victims of the Srebrenica genocide during the Bosnian War in 1995. The flower, Husremović said, represents hope. She also gave Bushman and Frueh traditional Bosnian copper plates engraved with an image of Sarajevo.

After an overview of the project’s mission by Mirza, the visiting international delegates toured Bridgewater’s campus, followed by a working lunch, a roundtable discussion with various College student groups and one-on-one meetings with their Bridgewater College counterparts. Tuesday’s itinerary includes the opportunity to attend classes by Dr. Betsy Hayes, Division Head for Humanities and Social Sciences and Associate Professor of sociology, and Frueh, a roundtable discussion on public discourse in the classroom and a wrap-up discussion of lessons learned and questions about the culture of civil discourse at Bridgewater.

Regarding this year’s theme, Frueh said it’s important that other universities have different answers to the question of a university’s role in civil discourse.

“The value of this interaction is to have that experience of difference,” Frueh said. “There are topics within any society in which people have to sort through their differences, and we as a culture in America celebrate those opportunities.”