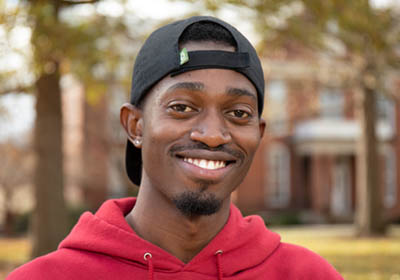 Growing up destitute in the township of Soweto in Johannesburg, Makhubo never dreamed he would have the opportunity to study in America.

Bhekumuzi “Prince” Makhubo ’19 grew up in Soweto, an impoverished township of Johannesburg.

“Growing up in Soweto taught me the value of community, regardless of the diversity of people and cultures,” Makhubo said. “There is a very rich sense of solidarity.”

“I don’t have a father and my mother doesn’t work,” Makhubo said. “You basically just live off peanuts. I want to be the person that breaks that cycle of poverty.”

As a first-generation high school graduate, Makhubo went on to study psychology at the University of Johannesburg.

With an outgoing personality and good grades, Makhubo was approached by the psychology faculty to consider spending a semester in America through the exchange program.

Applying online, he selected 10 colleges as his top choices, with Bridgewater College on the list. Being a big city-oriented person, Makhubo initially wanted to study in large metropolitan area, like New York or Washington, D.C.

“God was like no, I am going to place you in Bridgewater,” Makhubo said.

Makhubo had no idea where Bridgewater College was even located, but after coming to Bridgewater for the 2017 spring semester, Makhubo said he had “an amazing experience.”

A couple of weeks before returning home to Soweto, Makhubo realized he wanted to complete his college education at Bridgewater. But how could he make this happen?

He went to see College Chaplain Robbie Miller, who recommended that Makhubo share his story at the Bridgewater Church of the Brethren. Miller told the congregation that Bridgewater College had an exchange student who potentially wanted to come back to study at the College but that he did not have a place to live. “Is there someone who is willing to assist him?” Miller asked.

Chris ’00 and Amanda Beckwith Zepp ’01 opened their home to Makhubo and invited him to become part of their family—at no charge.

Even with the housing problem solved, Makhubo still had obstacles to overcome.

“A lot of people back home make safe decisions and are very comfortable,” Makhubo said. “When I made the decision to return to America, a lot of people went into panic.”

He was told he should complete his studies at the University of Johannesburg and then go to America for graduate studies.

But Makhubo was determined not to let anything stand in his way.

One of his biggest challenges was raising the money to return to Bridgewater College.

“Coming from a very destitute background I couldn’t afford the cost, so that meant I really had to work hard to raise funds,” said Makhubo. “The goal was greater than any obstacle that was presented to me.”

He received scholarships through Bridgewater’s Office of Financial Aid, but still needed to come up with nearly $10,000 for tuition, which translates to 136,000 rand in South African currency.

Having established close relationships with Bridgewater College faculty, staff and friends, as well as people from the Church of the Brethren, Makhubo created a GoFundMe fundraising page.

In addition, Makhubo now works 20 hours per week in the College’s dining hall and takes 17 to 18 credit hours per semester. “It’s a lot,” Makhubo said. “Sometimes I get really overwhelmed. I have to remind myself that a lot of people believe in me.”

One person who believes in Makhubo is Dr. Jamie Frueh, Director of Bridgewater College’s Center for Engaged Learning, who serves as his academic adviser.

Not only did Frueh contribute financially to Makhubo’s education, he also assisted him with creating his GoFundMe page and introduced him to other potential financial benefactors.

Other challenges included obtaining a visa. Makhubo planned to return to Bridgewater for the 2017 fall semester, but his visa was denied. In January 2018—with visa in hand—he arrived in Bridgewater.

One of the first things he did upon returning to Bridgewater was meet with his host family. “It was a really interesting time, as well as a lot of adjusting all at once,” Makhubo said.

One story Makhubo recalls is that the Zepps kept asking him if he was hungry. “They would tell me that if I was hungry, I should help myself to something to eat. At the beginning, I was shy and didn’t want to intrude, so I would always say ‘No, I am fine.’ I would actually starve myself,” said Makhubo. “They would tell me, ‘You need to eat something. We are offering you this opportunity.’ Now I eat and everything is fine.”

Of the Zepps, Makhubo added, “They have been absolutely amazing people. They treat me like their own son. I love them with all my heart, and I have learned a lot from them.”

When asked about his impressions of America, Makhubo says coming to the United States was a very beautiful experience. “It is very liberating and safe.”

Makhubo added, “I love Africa. It will always be home. There is always that feeling that can’t be explained verbally when I get to Africa. It feels right, but at the same time, its system, corruption and patriarchy are what really get to me.”

“I am from a very congested, fast-paced city,” noted Makhubo. “For me, this was culture shock—from the city to the rural area. I grew to love Bridgewater, and it is my second home now.”

Following graduation on May 4, Makhubo plans to move to New York, where he anticipates obtaining a one-year Optional Practical Training internship.

“I like putting myself in new and challenging situations,” said Makhubo. “I feel that New York City will offer me the platform to push myself to greater heights.”

A psychology major, Makhubo would like to spend a couple of years in America to establish his career. Then he wants to return home to Soweto and help the South African people.

“Mental illness is not a topic that is spoken of a lot, yet people suffer from it,” Makhubo said. “My goal is to reintroduce the idea of mental illness as a big problem and that it needs to be fixed. I want to work with mentally ill people.”

Makhubo is very appreciative of everyone who has helped him succeed in his journey to America and to Bridgewater College.

“I want to thank everyone who has believed in me and been a part of my journey—my friends, my host family, all my benefactors who have donated toward my education,” Makhubo said. “This is a really big opportunity for a small African boy like me. I really appreciate all the hands that were involved in making this happen.”