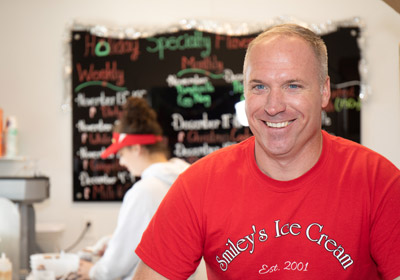 Derek Smiley, an ’04 graduate of Bridgewater College, started his mobile ice cream business with support from the Bridgewater community and now welcomes up to 1,000 customers on a summer day.

You know you’ve made it when a bride changes her wedding time for you.

Last year, Derek Smiley ’04, owner of Smiley’s Ice Cream in Mount Crawford, Va., took a call from a bride-to-be who wanted to book the store’s mobile ice cream truck for her big day. Almost every weekend Smiley is on the road, traveling from West Virginia and all over the state of Virginia, to dish out cool treats at fundraisers and gatherings. He regretfully told the bride he was already booked for another wedding reception that night. “No problem,” she said. “I’ll just move my wedding up to the afternoon.”

That’s got to be some good ice cream. According to Smiley, all the credit goes to the cows, but his focus on small-batch ice cream made with local, fresh ingredients can’t be ignored. Smiley’s gets a premixed blend of fresh milk and cream along with sugar (the base of the ice cream) from the Mount Crawford Creamery located some 200 feet from the shop’s front door. Smiley admits that the opportunity to pet the calves or watch the moms being milked can be just as much a draw for guests as the ice cream itself.

Smiley’s is open seven days a week (Mondays were added as of 2019), with peak season, of course, being the summer months. It’s not uncommon to see a line of customers wrapped around the building or to see Smiley directing traffic in the parking lot. A busy Saturday in the summer can total up to 1,000 guests—a sixth of the town of Bridgewater. Smiley orders 200 to 300 gallons of premixed milk and cream each week in the summer, which are used to churn out some 12 different flavors, including weekly and monthly specials.

“The most fun part about this job is the creation of flavors,” said Smiley, who went through 12 different samples to find the perfect combination for his vanilla flavor. “My brain is always spinning: What can I do, how can I tweak something, how can I make it better?”

It’s no surprise to Smiley’s family that he went down the entrepreneurial path. In high school he grew spring/summer annuals at a greenhouse on his parents’ property to sell at the Harrisonburg Farmers Market. After attending Blue Ridge Community College for two years, he decided to transfer to Bridgewater and brainstormed with farmers market coordinator George Mertz about ways to make money to pay for school. Mertz had the answer: Sell ice cream. Smiley launched his mobile cart first in 2001 while still a student at Bridgewater (he majored in liberal arts, working toward elementary education licensure, and was on the baseball team) and kept it as a side gig while teaching third and fourth grade in the area. He opened the standalone store in 2016 while promising his mom, Debra, the store manager, that he’d step back from teaching in two years to run it full-time. But the shop quickly became so popular (they had to make ice cream around the clock to keep up with demand) he made the switch earlier than expected last spring.

One of the best parts of his job is seeing the community come together in a shared space. Whether it’s a Little League team celebrating a Friday night victory, the Red Hat Society ladies playing canasta or the Bridgewater College Department of History and Political Science (secret’s out!) hosting a meeting, Smiley always envisioned creating a place that, well, put smiles on people’s faces.

“Seeing the community and knowing you’re supplying a product that people love and helps bring people together … it’s just cool,” he said.