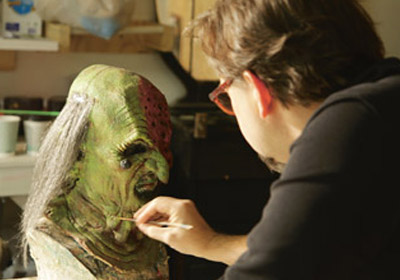 Louis Brown ’90 uses his bachelor of art from Bridgewater College to sculpt masks and make the costumes and props for his Luray, Va., haunted house.

The first thing Louis Brown does is apologize for his voice, as he pulls a cough drop out of his pocket outside Darkwood Manor, the entrance to which is guarded by an ominous looking skeleton head.

“I was a monster last night,” he said with a bit of a rasp.

Brown ’90, an art major with a focus on sculpting and a minor in philosophy and religion, is owner of the haunted house in Luray, Va., that attracts 6,000 to 7,000 visitors each season. He occasionally fills in to play a character if he doesn’t have enough actors for that night’s performance, and he relishes the opportunity to be up close and personal with his guests. Translation: He really gets into it.

“If I put my paintings or sculptures in a gallery, [the] reaction [would be] ‘I like this,’” he said. “ … When people go to a haunted house, they respond to your work very loudly. You get screams and laughter, and you know you’ve done your job, that they’re enjoying it. I want that visceral response.”

Twenty years ago, a friend of Brown’s asked him to help create a haunted house for charity, and as he searched online for inspiration, he realized haunted houses had come a long way from the “squishy eyeballs” tactic (peeled grapes) of his youth. These updated haunted houses were elaborate, theatrical undertakings, which appealed to Brown’s love of art and film, especially science fiction. After taking on that initial fundraiser project, he started his own haunted house in 2000. Brown had been working as an artist since graduation, but once the 2007-2008 economy threatened his day job, he made the switch to haunted house ownership full-time.

If the devil is in the details, then Darkwood Manor must be the spookiest attraction imaginable. Each year, Brown begins by creating a detailed backstory for that season’s theme, which revolves around a member of the Darkwood family, the fictional owners of the house. His longest to date—the year of the vampires was 13 pages long.

Brown says maintaining staffing levels is one of the hardest parts of the business. He tells everyone right off the bat: The masks and costumes are hot, and the acting is intensely physical. He hires 25 to 40 people in June knowing they all won’t make it through the summer acting classes and to the 13 to 16 run dates from late September through Halloween. No matter how small a part someone has, Brown encourages them to develop a backstory for their character, so that every choice they make when interacting with a new guest, one about every two minutes, seems real.

“With a play, you’re on stage being watched. People aren’t talking to you,” he said. “You have to be able to think on your feet with this stuff.”

Haunted houses don’t typically change themes each year, but it’s clear that Brown’s creativity knows no bounds. This year’s haunted house focused on Ed Darkwood, a fictional failed movie producer (inspired by the real filmmaker Ed Wood) whose collection of 1980s horror movie rip-offs was discovered. Brown changes up about 15 to 20 percent of the structure of the house each year, then designs each room in accordance with the theme. This year, he wanted visitors to undergo a truly immersive experience and decided to put them inside each of Darkwood’s movies that paid homage to icons such as Gremlins, Poltergeist and Ghostbusters. Every room of the haunted house is dedicated to a different fake movie, which Brown also immortalized in posters he designed that hang in the front lobby.

You’d no doubt remember creeping by the cockroach-covered kitchen walls from Night of the Insectoids, and you’d be hard-pressed to forget the image of a hollow-eyed, ghostly figure shrieking at you from inside a TV set in Phantom Watch then suddenly shattering the screen and appearing before you. But you’d likely miss the nuances, “Easter eggs,” as Brown calls them, that he places throughout the house. There’s the homage to film director John Landis in one room, and a nightcrawlers sign that used to hang in Brown’s parents’ house. And that musky smell that follows you everywhere? That’s an actual “haunted house” fragrance.

“No one realizes how much goes into it,” Brown says.

Brown starts working on the next year’s theme as soon as one season ends. By December, he’s back in his studio, constructing new set pieces like a giant rat/alligator puppet and sculpting the five to 10 new masks typically needed (his collection totals in the hundreds). His creative wheels are always turning. Last year, he designed a 3-D maze that visitors can explore at the end of their night for an extra $5. Eventually, he hopes to move his workshop to an adjacent building to give him more room. The 10,000 square feet of haunted house space just isn’t cutting it.

Originally a computer science major, Brown said he learned quickly it wasn’t the right choice for him. He has always been at home in the art world, starting with making 8mm films in his parents’ basement as a kid to creating cinematic escapes as an adult.

“I couldn’t think of anything else I’d rather do,” the art major said.