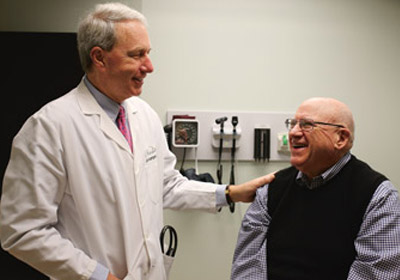 Dr. Jim Mumper’s PartnerMD is changing the traditional medical model with short wait times and up to 90 minutes for appointments.

As a primary care physician, Jim Mumper ’79 has enjoyed forming close relationships with his patients and guiding them to healthy lives. Nearly two decades into his career, he was seeing about 30 patients a day and growing frustrated with the unrelenting pace of modern health care. It was becoming almost impossible to deliver the personalized, holistic care he felt his patients needed.

“It was becoming a challenge to deliver the quality of care that [I envisioned] when making that effort to go to medical school and become a doctor,” said Mumper, who graduated from the University of Virginia School of Medicine. “The volume was getting really busy, so I did not always have the time with patients to address preventable issues. I wanted to know my patients well and to be able to spend time with them.”

Mumper explained, for example, that primary care doctors can easily identify patients who are at risk for a chronic disease such as diabetes. With only about 10 to 15 minutes to devote to each patient, however, they have to prioritize the patient’s immediate complaint. There’s rarely sufficienttime to uncover unhealthy habits or discuss preventive measures.

“I felt that constant pull to stay on time—to be respectful of each patient’s time versus spending an extra few minutes with someone who really needed more of my time,” he said.

In 2002, a former colleague approached Mumper about the possibility of establishing a concierge medicine practice—a primary care delivery model in which patients pay a membership fee in exchange for a higher level of service and greater access to their doctors.

Mumper was all in. After 17 years of practice with a large multispecialty group in Richmond, Va., he co founded PartnerMD in February 2003. He was the organization’s first doctor, starting with nearly 50 patient-members.

“This was an opportunity for me to develop a new medical model—something that would be much more proactive and preventative in nature,” said Mumper, who now sees just eight to 10 patients a day, designating up to 90 minutes for most appointments. “That really got me excited.”

In traditional primary care, physicians typically have 3,000 or more patients in their patient panels. For doctors at PartnerMD, that number is capped at 600 or fewer. Patients usually can get appointments on the day they call, and wait times are typically no more than five minutes.

“With this approach [to care], we talk a lot about the importance of sleep, food choices, physical activity and brain health—all these things that are vitally important to a person’s life as they age,” Mumper said. “We have more time to do research, and we try to be very cutting-edge in how we manage our patients. It’s not that I didn’t feel like I was helping people in my traditional practice—I was. But I feel like I’m able to accomplish much more with an individual in this type of practice than I could in a traditional practice.”

Over the 15 years since its founding, PartnerMD has grown to 9,000 members, with 25 doctors and nine health coaches across seven offices in Virginia, Maryland, North Carolina, South Carolina and Georgia. The organization just launched a partnership with VCU Health System to provide comprehensive genetics counseling and testing to its members.

“PartnerMD has grown much beyond my expectations,” said Mumper, noting that the organization was the second concierge medicine practice established in Virginia. “I did not anticipate that the demand would be so great, and it’s been pretty steady from the day we opened.”

Though concierge medicine still accounts for just a small percentage of primary care practices, Mumper sees this model as ideal for preventing burnout in family medicine.

“Primary care physicians often struggle with burnout because of the pace and the demands of the occupation,” Mumper said. “I think the advantage of [concierge medicine] is it allows physicians to continue to practice and feel good about what they are doing. We still work hard, but we’re spending more time with fewer patients.”

Mumper credits Bridgewater’s liberal arts approach for preparing him to succeed in this venture.

“The value of a great liberal arts education is [gaining] the ability to think beyond what your little niche is supposed to be,” said Mumper, who is married to the former Pamela Miller ’79, and has two adult children. “[That background] helped me think about how we need to market this venture, and I could talk to people and explain this concept to them. That breadth of education that I got at Bridgewater enabled me to be flexible and nimble enough to go beyond my comfort zone.”