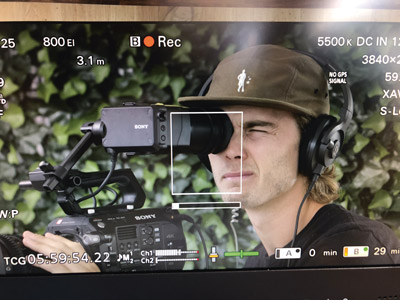 Andrew Buss ’16 launched his own media production company with his brother immediately after graduating from Bridgewater College with a bachelor of business administration.

Andrew Buss ’16 sees himself first and foremost as a storyteller, and that’s evident in the name of the Santa Monica, Calif.,-based media production company he co-owns with his brother, Connor. The two 20-somethings named Foreword Films after the notion that everybody has a story and every journey has a foreword—your beginning impacts who you are today.

Buss’ own history is twofold. The brothers spent their childhood making films with friends, but the idea for the business came when Connor, who was studying film at the University of North Carolina Wilmington, came home for the summer and declared that they should start their own company. They formed an LLC while Buss was still in high school, and he decided he should major in business in college to balance out Connor’s film studies.

Buss’ other love growing up was lacrosse. He played throughout childhood and in high school, and he knew he wanted to continue playing in college. While visiting colleges in North Carolina with his dad, Stewart, the goalie received an email from Bridgewater’s head men’s lacrosse coach, Mic Grant, who was recruiting for the College’s first men’s lacrosse class. The father and son decided to stop at Bridgewater on their way home to Maryland, and both had a feeling about Bridgewater that they didn’t get from any other school they had visited.

“It was definitely a sense of community and home-like feel,” Buss said.

Being a part of Bridgewater’s inaugural lacrosse team gave Buss the opportunity to develop his leadership skills (a necessity in the business world), as there were no seniors to guide the first-year players. He enjoyed the opportunity to help build the foundation for a program that would last far beyond his four years guarding the net.

Immediately after graduating with a degree in business administration, Buss moved to California to launch the production company with his brother. Many times, the Buss brothers are the youngest people on a film set, but as the only two full-time employees at Foreword Films (they recently hired an additional part-time employee) they are running the show in terms of concept, filming and the final product. They do it all: from storyboarding initial ideas with clients to making graphics and more.

Three years in, Buss attributes their success with saying yes early on. The pair took on whatever projects came their way after cold calls, emails and in-person pitches. Making connections had a snowball effect that brought in more jobs and helped build the business. Foreword Films’ client base includes many family-run small businesses and nonprofits. Their stories of building something from the ground up fueled by passion and vision rings true for the Buss brothers.

“We’re able to listen and relate to a lot of our clients,” Buss said. “We want to spend a lot of time with our clients and make sure we’re telling their story their way, but that we’re also adding our twist and style to it.”

Although the business owners take inventory at the beginning of each year of what they’re doing right and what they’d like to improve on, Buss said it’s important for them to keep a certain amount of flexibility in their goals. That fluidity allows their dreams to take new shapes, to expand or shrink back as life unfolds. It allows the young entrepreneurs to have an open ending to their story.