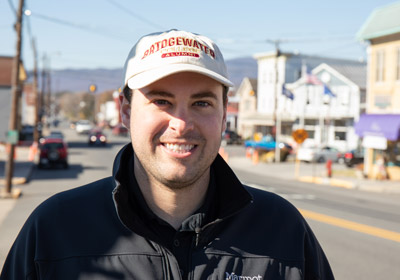 Joshua Gooden ’16 uses his bachelor of business administration with an emphasis in marketing from Bridgewater College in his own business as a photographer as well as in his day job as Economic Development and Tourism Coordinator for Rockingham County.

Joshua Gooden ’16 knows the benefits of superb marketing. Gooden, who serves as the Economic Development and Tourism Coordinator for Rockingham County, spends his days helping businesses and entrepreneurs in the Shenandoah Valley promote themselves and coordinates partnerships among area organizations and community leaders to better leverage the area’s impact as a whole. Beyond that, Gooden, who majored in business administration with an emphasis in marketing at Bridgewater College, is an entrepreneur himself. He photographs high school basketball games and community events with the intent of capturing the spirit of the place he calls home—Elkton, Va.

One draw of Bridgewater for Gooden was that it was close to his town with a population of 2,900 (he was a commuter student), which afforded him the opportunity to show his new friends the area he knows and loves. During the summers, Gooden worked for a local outfitter that offered kayaking, canoeing and tubing trips. Serving as a guide and sharing his insider knowledge of the area with visitors from all over the country fell right in line with his marketing studies.

But Gooden’s college experience looked vastly different than that of his peers. As a first-year student, Gooden, then 18, decided to run for an open seat on Elkton’s Town Council. Gooden started considering a run when, three days after his high school graduation, a candidate for mayor asked Gooden to sign his petition to get on the ballot. That got Gooden thinking: Why not just run himself? After all, he’d earned the nickname of “Mr. Elkton” from his eighth-grade basketball coach for his dedication to community service, and he even snagged rides to Town Council meetings from his mom, Lisa, before he got his driver’s license in high school. Juggling schoolwork with Town Council duties was certainly trying at times for Gooden, but the council made sure to set meetings around his class schedule.

Gooden said the prevailing mindset at the College of performing outreach to others further cemented his decision to remain involved in politics after six years as a council member. When several residents asked Gooden to run for mayor of Elkton, he officially threw his hat in the ring in June 2018.

Gooden, who turned 25 a few days after Election Day in November, is the youngest mayor in Elkton’s history. As the ostensible CEO of the Town of Elkton, he runs the Town Council meetings and fields constituents’ concerns, with his biggest goal of continuing to showcase and market the community, especially the downtown area. Elkton’s proximity to Skyline Drive, Shenandoah National Park and the Appalachian Trail, to name a few nearby attractions, makes it prime for promotion, according to Gooden, who assumed the mayor’s chair on Jan. 1.

“Elkton is perfectly situated and on the verge of revitalization,” he said. “We have so many attributes from downtown to the scenery, we just need to decide how we plan to showcase the town to the rest of the state and the country.”