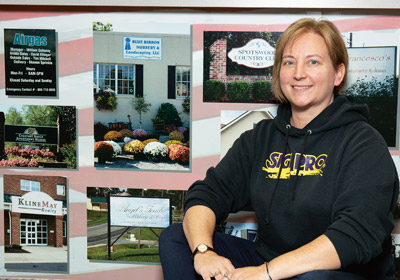 As the owner of two sign businesses, Signs USA and Sign Pro, both located in Harrisonburg, Va., Kerry Estabrook Cofield ’96 is there for the big moments in everyone’s life. Her shops perform a variety of services, including creating signs for new businesses, engraving trophies and plaques and making vehicle wraps to advertise newly launched products and services. Although Cofield loves that her job changes day to day, the one constant that brings her the most joy is working directly with customers.

“My passion is people,” she said. “I love being able to connect with people, and this business lets me be able to do that.”

Cofield works with clients on their vision for the final product and relays that information to her team, which includes an in-house designer and installation crew. Some of Cofield’s clients have been with her for 15 years.

“Our key focus has always been quality customer service and making sure the integrity of our product is never compromised,” she said.

Originally from the New England area—her family moved around a lot—Cofield was introduced to Bridgewater by a high school classmate, who invited her down for a visit. She was immediately enthralled with the intimate, close-knit feel of the campus. Bridgewater was the only college she applied to, because she had found the only place that ever felt like home.

“Academically, I think you can learn the same things at almost any university, but I think the foundation for what it takes to become a successful person comes from the experiences that you have,” she said. “My experience at Bridgewater is what enabled me to be that person.”

Cofield began working in the sign business right after graduation, first at Hi-Tech Signs in Harrisonburg and later as an employee in the production department at Sign Pro. Cofield had been working at Sign Pro for two years when she learned the business had been sold, but that the prospective new owner had backed out of the deal. Cofield and her husband, Tony ’95, had been saving money with the thought of investing in real estate, but instead put it toward Cofield’s new venture as a business owner at age 28. In December 2014, Cofield also purchased competitor Signs USA.

There was certainly a transition phase as Cofield, an English major with a minor in communication studies, learned the ins and outs of running a business. But doing things that scare her, that challenge her, is second nature to Cofield, who created a bucket list of goals she wanted to accomplish after a life-changing event.

Shortly after graduation, Cofield was struck by a car when walking down the side of the road on a rainy night, and she spent three weeks in the hospital followed by months of physical rehabilitation. Her doctor told her she would never run again or have children due to the multiple pelvic fractures. But after completing her first 5K, then 10K, then multiple half marathons, then a full marathon, and giving birth to her two sons, Cofield realized she couldn’t let anyone else tell her what her limits were.

“I feel like if you’re not challenging yourself you’re not growing,” she said. “I think everyone needs to be true to themselves and what they’re comfortable with, but it’s OK to test that comfort level sometimes.”