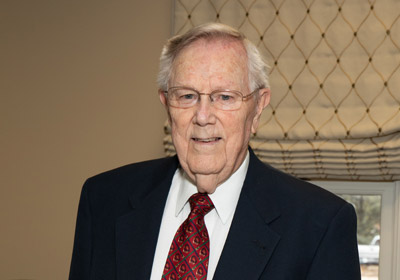 Wallace Hatcher ’55 founded Lantz Construction Co. with a focus on treating clients and business partners with fairness and integrity.

In the five decades since Wallace Hatcher ’55 founded Lantz Construction Co., the business has grown and evolved into an industry leader. But one thing hasn’t changed: the company’s commitment to “treating all
clients and business partners with fairness and integrity.”

“We did quality work, and we did honest work,” said Hatcher, former chair of the Bridgewater College Board of Trustees. “We had people who would hire us to do their work without even asking how much it was going to cost, because they knew we would be honest. That pleased me, of course. To this day, the company is well-respected, and I appreciate that as much as anything.”

After graduating from Bridgewater, Hatcher served in the U.S. Army. Upon completing his term of service, he and his wife, Carolyn ’57, moved to Broadway, Va., where he began working for the building supply company owned by his father-in-law, C.D. Lantz, also a former member of the College’s Board of Trustees.

Hatcher began his own business by purchasing plots of land from his father-in-law and building houses. Though he didn’t have carpentry skills, he hired contractors to complete the jobs while he oversaw business operations.

When Hatcher first started the business, he often had to help buyers with financing their home purchases—a significant challenge that affected cash flow and slowed the company’s growth. In 1960, he established Lantz Homes Inc. with six employees. By 1976, the company’s focus had shifted from residential building to commercial and industrial jobs, and its name was changed to Lantz Construction Co. Today, the company has more than 100 employees.

Since the completion of its first million-dollar project—construction of the Plains Elementary School in Rockingham County—Lantz Construction has built a wide variety of prominent structures in the Shenandoah Valley, including Bluestone Vineyard, the Sentara RMH Orthopedic Center and the Bridgewater Fire Department. The company also has done numerous projects at Bridgewater College over the years, including the Flory Hall connection between Wardo Hall and Founders Hall, the Nininger Hall renovation, the Kline Campus Center ground floor renovation, the enclosed practice facility for baseball, softball and golf and Bowman Community Plaza.

Hatcher, a native of Bassett, Va., met his wife, the former Carolyn Lantz, at Bridgewater College. She attended the College for a year and then completed her education at the Rockingham Memorial Hospital School of Nursing. The couple, who have been married for 61 years, have three adult children: Michael, a 1982 BC graduate (who married Holly Hoover ’84), Gayle and Lisa Carol.

A business major at Bridgewater with minors in economics and accounting, Hatcher credited outstanding professors for providing a strong education that provided the foundation for his career.

“I had good business professors and a great experience at Bridgewater,” Hatcher said. “It was a high-quality education and remains so today.”