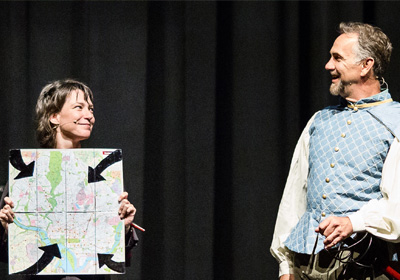 Ted & Company will present We Own This Now, which looks at love of land, loss of land, and what it means to “own” something.

Ted & Company TheaterWorks will present Bridgewater College’s Fall Spiritual Focus at 7:30 p.m. Tuesday, Oct. 22, in the Boitnott Room at the College. The performance is free and open to the public.

We Own This Now, a play by Alison Brookins, stars Ted Swartz and Michelle Milne. The play looks at love of land, loss of land and what it means to “own” something.

Swartz, a writer, actor and producer who combines theater and a seminary education, has been in the business for more than 20 years. He is owner and creative director of Ted & Company TheaterWorks, a professional touring company based in Harrisonburg, Va. He serves as the executive director of the Center for Art, Humor and Soul (CAHS).

Swartz is the creator or co-creator of more than 14 shows, which he performs across the United States and around the globe. He is also co-author of the book Laughter is Sacred Space.

Milne, an actor and movement director, has worked as a performer, director, writer and educator across the country.

She has appeared as supervisor McCrae in the sci-fi television show pilot Decktechs. Her original piece about the U.S.-Mexico border, For Those Who Cannot Fly, premiered in San Francisco; she is expanding that piece for further touring under the title Edge Effects.