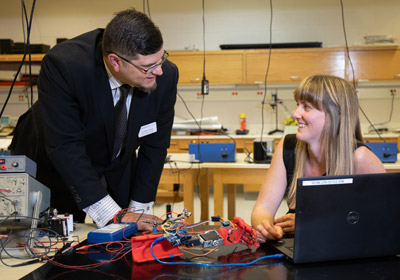 Rachel Zarin ’20 envisions a future in which prosthetic limbs can be created with a few clicks of a button—and for a fraction of the cost of most prosthetics.

Rachel Zarin ’20, a senior double major in applied physics and health and exercise science from Woodstown, N.J., envisions a future in which prosthetic limbs can be created with a few clicks of a button—and for a fraction of the cost of most prosthetics. Her innovative idea, which is at the center of her Dr. John Martin Summer Science Research Institute project with Assistant Professor of Physics Dr. Jason Ybarra, reduces the cost of a prosthetic arm from upwards of $30,000 to $100. Customers would be able to purchase motors, sensors and other parts needed online, as well as create pieces for their prosthetic using a 3-D printer.

“There are millions of amputees who would benefit from prosthetics but most people can’t afford them,” said Zarin.

Zarin has been interested in building things from a young age, when Legos were still her medium of choice. She even constructed a knee model out of wood and string for her eighth grade science fair project. As a student at Bridgewater, Zarin took her interests even further when she took advantage of the College’s intensive May Term courses her sophomore year and constructed an arm model as her final project in a 3-D printing. After identifying her goal of attending graduate school for biomedical engineering, Zarin approached Ybarra about adding a physics major to her course load. The synergistic nature of the computer science courses within the physics major curriculum added to Zarin’s skill set, which she was able to expand upon even further with her summer research project.

After seeing different projects based on 3-D printed prosthetics, Zarin wanted to combine her interests in health and engineering to make her own version. The project would also give her real-world research experience that is critical in her chosen field. She credits the close student/faculty relationships at Bridgewater as well as the readily available research opportunities for students—especially those intending to combine different fields of interest—with helping bring her project to fruition. The main goal of Zarin’s project, “Improving Low Cost 3-D Printed Prosthetics with Sensors,” was to create a prosthetic hand that could grip a cup and bring it to a person’s mouth while keeping the cup level. Zarin had seen other 3-D printed prosthetics but they moved from the arm joint only. She proposed attaching tilt and force sensors to the wrist and hand that would give information about its environment, which would fine-tune the hand’s movements.

Zarin began the project by designing a prototype for the prosthetic using other 3-D prosthetic projects for inspiration. Then she determined the proper values to make each motor and sensor work through computer code. The materials for her project can be found online or in hobby shops, such as motors used in radio control cars. The accelerometer-gyroscope chip she purchased is used in hobbyist drones that keeps the drone level. But Zarin quickly discovered a drone’s steady flight path is vastly different from the intricate series of movements a hand makes. She realized the original computer code only used the acceleration values for the angle of the motors, which made the hand’s movements jerky. She had to rewrite the code using the gyroscope information as well.

“Creating my own design was really cool, as was integrating all the different aspects of programming, electronics and 3-D printing,” Zarin said.

One of the trickier parts of the project was devising a way for the fingers to open and close. First, she threaded guitar strings through the finger joints to act as tendons on the underside of the hand, pulled by a motor. However, she couldn’t get the hand to open back up after closing—too much force was needed. She tried other materials but found wire wasn’t flexible enough. Eventually, she kept the guitar strings and attached thin elastic bands to the back of the fingers and the motor to help pull them back open.

Ybarra, an astrophysicist, said working with Zarin on a project like this, one outside of his wheelhouse, defines the Bridgewater experience for both faculty and students. Ybarra learned alongside Zarin as he helped her problem-solve as issues arose and helped her understand the physics behind the results. Zarin said the trial-and-error nature of the project has prepared her well for future research and jobs.

“There’s so much that we can teach in the classroom, but research and development is mostly troubleshooting and seeing if things work,” Ybarra said. “In the lab in class things go well, but when you do a project like this you’re going to have obstacles. Students have to be troubleshooters, and I think this is a great part of that experience.”

In seven weeks, Zarin built a prosthetic hand that responds to its environment. When the side of the hand hits a surface, as it would when picking up a drink, its fingers close due to a contact switch on the hand. The fingers open back up when the hand touches the surface again. The hand remains level as it moves. Although the hand’s movements are jerkier and slower than she would like and could be adjusted with further research, Zarin said she is happy with the project outcome and hopes to present her findings at a conference this year. Ybarra said Zarin’s project is a proof of concept that other scientists could look to for their own projects, with the goal of creating improved prosthetics that enhance a user’s quality of life.