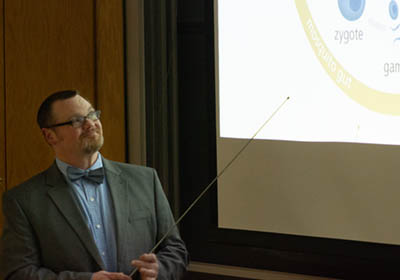 Samuel Moretz ’99, this year’s Silliman lecture speaker at Bridgewater College, credits the research opportunities at the College for preparing him for a successful career in biomedical research at the National Institutes of Health.

Samuel Moretz ’99 turned a lifelong fascination with biology and the outdoors into an exploration of molecular biology and microbiology at Bridgewater College. Bridgewater prepared him to flourish in a career that led him to the National Institutes of Health and malaria research. Twenty years later, Moretz returned to speak to current BC students about the course his life and career have taken for the annual Silliman lecture, a talk sponsored by the Frances E. Silliman Memorial Endowment Fund.

Named for a former BC professor, the Silliman fund not only supports visiting speakers in the field of biology, but also funds student research and memberships to the American Society for Microbiology.

Moretz benefited from Bridgewater’s legacy of strong teaching in biology and came back Jan. 10 to further inspire the next generation studying within the walls of the McKinney Center for Science and Mathematics. When Moretz arrived on campus as a first-year student in fall 1995, the McKinney Center was brand-new and stood as a testament to Bridgewater’s commitment to science and mathematics. In addition to getting to use the new labs and equipment in McKinney, Moretz studied molecular biology and microbiology under Dr. Steve Baron. He completed independent studies and research “every chance I could get.”

His biological research included looking at the microbes used in making a fermented yeast product (better known as beer) and taking samples from the North River to test for coliforms (a type of bacteria often produced by animal feces). “My first love was molecular biology,” he said. He also took advantage of an internship opportunity with a state immunology lab that was in operation at the time in Luray, Va., testing samples for common sexually transmitted infections.

Upon graduating with a B.S. in biology in 1999, Moretz took a position with a large pharmaceutical manufacturer that specialized in antibiotics. He soon decided to pursue graduate studies and enrolled at East Tennessee State University, earning his M.S. in microbiology in 2003.

In 2004, he joined the Malaria Vaccine Development Branch of the National Institute of Allergy and Infectious Diseases at the NIH. Moretz walked the audience through the malaria life cycle, in both its human and mosquito hosts, and various elements of malaria vaccine research.

During 2014-15, Moretz took a brief “detour,” as he called it, from biomedical research into biometrics, as he briefly managed a biometrics system development program for Navmar, a U.S. Navy contract firm.

This experience honed his skills in areas from software and databases to communication and managerial skills, and though working with facial recognition and fingerprint and retinal scanning was initially out of his comfort zone, he believes it prepared him for management and the next phase of his career.

But “malaria was in my blood,” he joked, and in 2016 he returned to the study of malaria and the NIH as the Scientific Operations Manager of the Laboratory of Malaria and Vector Research. He currently serves as the Operational Program Manager of the 12 distinct LMVR research sections and is the general manager of the LMVR insectary facility.

The insectary, Moretz explained, is where they keep more than 25 distinct colonies of mosquitoes and infect them with malaria through red blood cell cultures. The research into the possibilities of a vaccine for malaria continues, including research into transmission-blocking vaccines, which would potentially arrest the parasite’s development at a specific point in its life cycle in the mosquito host.

Moretz credited BC with teaching him “to be a lifelong learner” and giving him the confidence to stretch himself and succeed throughout his career. He encouraged current students to do the same and take the necessary occasional “leap of faith” to pursue detours and increased responsibility along the way.