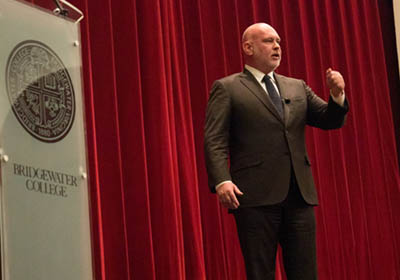 To combat divisiveness, Schmidt urged everyone to listen respectfully to each other in every interaction–both political and civil–and to remember that we are not enemies, that we share more similarities than differences.

Political strategist Steve Schmidt kicked off his endowed lecture at Bridgewater College Jan. 15 with one of the late Arizona Sen. John McCain’s favorite quotes by Chairman Mau. (In 2008, Schmidt, who has counseled world leaders, CEOS, celebrities and politicians in the last two decades, took over most operations of McCain’s presidential campaign.) Schmidt joked that the words were meant as comfort to those who are dissatisfied with the state of affairs in our country today.

The lecture was sponsored by the Anna B. Mow Symposium on Comparative Religious Ethics and presented by the Center for Engaged Learning at Bridgewater College. Professor Skip Burzumato, Director of Endowed Lectures, told the near-capacity crowd at Cole Hall that the mission of the program is “to bring to campus speakers, ideas and opinions to challenge students and community members to become more informed and responsible and engaged citizens.”

Schmidt said said each generation has a tendency to think that because they are present what they are experiencing is important, but the reality is our country has been through worse times throughout its history, and it’s our continued resiliency, coined “American exceptionalism,” that makes us thrive.

We are the only country in the world that was founded not on ethnicity, or land ownership, but the power of an idea, he said. And that idea, the “most important idea ever put on paper,” that all men are created equal with regards to life, liberty and the pursuit of happiness, means that America has been able to do more good than all other countries.

The overarching fear for each generation, then, is that it will hand the country to the next generation worse than when they inherited it. And with the majority of the current generation projected to live into their 100s, we are at a moment in time, Schmidt said, where the question becomes critical: What type of country will they live in?

Schmidt highlighted American optimism by discussing the vision Dr. Martin Luther King Jr. (the lecture took place on the anniversary of his birth 89 years earlier) had for our country: that one day the country would meet its destiny by fulfilling its promise as prescribed in its charter, that all men are created equal. Fifty years later, it remains the duty of all Americans to continue the struggle to realize King’s vision, he said. 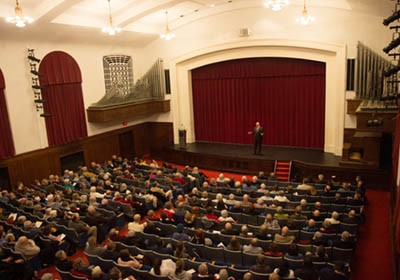 Schmidt said he was in the persuasion business during his political campaign career, and that politicians tended to debate issues down a vertical axis. He used the analogy of debating between the 45-yard line on a football field. But in today’s world there is a new horizontal line, in which 25 percent of the country prospers above that line. Below that line, the third of the country that is middle class believes their children will be worse off than they are and that there is a high chance they’ll fall into the bottom 40 percent of the country economically.

Sen. Bernie Sanders, U.S. Rep. Alexandria Ocasio Cortez and President Donald Trump are all saying the same thing, Schmidt said, that “there’s one set of rules for people who live above the line, written by them for their benefit at the expense of everyone who lives below the line.” And in countries all over the world, regular people who are fed up with the elites are rebelling.

To illustrate the notion of unity despite party differences, Schmidt told the story of the friendship between two senators, Danny Inouye and Bob Dole. The two men shared a room at an Army hospital in Michigan and spent time together recovering after being wounded in World War II. Dole initially planted the seed of serving in Congress to Inouye, and although they voted against each other every time (Inouye was a Democrat, Dole a Republican), Schmidt said the two maintained a close friendship, like brothers, throughout their lives.

At this moment in time, Americans have a choice to make, Schmidt said, between renewal and decline. To combat divisiveness, he urged everyone to listen respectfully to each other in every interaction–both political and civil–and to remember that we are not enemies, that we share more similarities than differences.