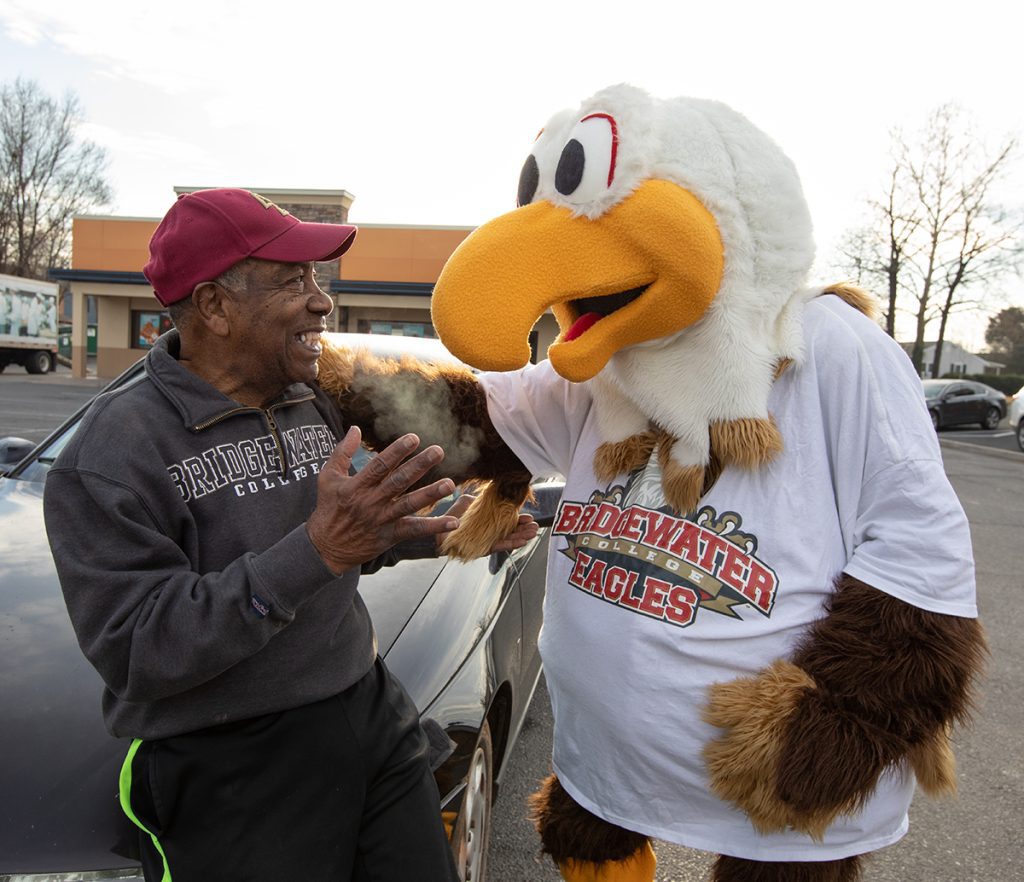 The death of 89-year-old Carlyle Whitelow ’59 on Oct. 15, 2021, generated a wave of profound sorrow among the thousands whose lives he had touched directly. Thousands more who saw him only for a few fleeting seconds every morning as he waved to them from the periphery of Main Street in Bridgewater, Va., would grieve as well, even if they never knew his name.

Few people in living memory have had such a profound effect upon the community as did this Bridgewater icon. Always focused on the well-being of his fellow man, Whitelow devoted himself to bettering people’s lives any way he could, personally and through several church and civic organizations. He helped feed and clothe the hungry. He ministered to those who were homebound, sick or dying. He gave completely and freely of himself and his resources, always eschewing recognition or payback.

But, of course, he received numerous accolades throughout his life, including being inducted into BC’s Athletic Hall of Fame and being named Faculty Member of the Year. The community also loved Whitelow and recognized him with honors and awards throughout the years, including the Citizen of the Year Award from the Bridgewater Ruritan Club and the Humanitarian Service Award from the Bridgewater Retirement Community. In 2018 he was awarded the fifth annual Commonwealth’s Attorney Citizenship Award for “making the community better.”

When he died, neither busy work schedules nor the lingering threat of COVID-19 kept hundreds from filling the Bridgewater Church of the Brethren for a memorial service.

Tears abounded, of course, but there was also laughter and a sense of joy in honoring this once-in-a-lifetime jewel of a man.

Whitelow was born Sept. 6, 1932, and grew up around Bridgewater College. His father, Faith Hope Whitelow, was a chef at the College for 25 years, and his mother, Muriel Beal Whitelow, was likewise employed in dining services. From an early age, he and his brother, Alfred T. Whitelow ’60, played on the campus while visiting their parents.

The stories associated with Whitelow’s collegiate athletic career (in what was still a predominantly segregated section of society) are legendary. Often, the bus that carried him and his teammates to regional competitions would stop for a meal. On more than one occasion, restaurants would refuse to serve Whitelow because of the color of his skin. By unanimous agreement, the coach and every member of the team would refuse to eat there as well.

Dr. Jim Reedy ‘61, one of Whitelow’s teammates and a close friend for 65 years, says Whitelow never harbored any animus as a result of these experiences. If anything, he says, they caused him to redouble his efforts to help his fellow human beings, regardless of color, religion or any other distinguishing factor.

For the next 28 years, Whitelow taught in the Department of Physical Education and coached football, basketball and tennis. He also supervised student teachers through BC’s Teacher Education Program.

But as recognized as Whitelow was as an athlete, coach and teacher, his dedication to caring for others truly defined his life and endeared him to untold numbers of people. A longtime member of the Bridgewater Rotary Club, he worked quietly and diligently to better the lives of others through club projects and his own initiative. He was an active member of the John Wesley United Methodist Church in Harrisonburg, Va., and was appointed by Industrial and Commercial Ministries to serve as chaplain at the Bridgewater Retirement Community. He also served on the boards of The Salvation Army, the North River Library and the American Red Cross.

Although his position as chaplain was officially to help meet the counseling needs of BRC’s employees, Whitelow didn’t confine his nurturing to just those who worked there.

“If you had a problem, or your morale was low, or you just needed someone to talk to, Carlyle was there,” says Lavenia “Lev” Norford ’70, Director of Communications at BRC from 1989-2020. “He provided this support to our employees, but he also went from room to room to see the residents, and they all knew and loved him. His whole aura was one of love and understanding.”

Jim Harlow, President of the Bridgewater Ruritan Club, knew Whitelow for years, both as a fellow Ruritan and chaplain at BRC. The Ruritans honored Whitelow as Citizen of the Year in 1980. In a note Whitelow wrote to the club, he said, “I always tried to make my life one of giving, not receiving. If I could give everyone happiness and make them smile, then I am rewarded. I shall continue to live this way, too.”

“There’s no filling his shoes,” Harlow said in a Harrisonburg Daily News-Record article on Whitelow’s passing.

In June 2018, the town of Bridgewater surprised Whitelow by naming its newest park Whitelow Park. He had to be tricked into attending the ceremony; longtime friend and fellow Rotarian Ellen Layman ’65 figuratively dragged him to the surprise ceremony, where he responded to the honor with graciousness.

Despite his determined avoidance of the spotlight, in 1995 Bridgewater College recognized Whitelow and his family—Faith, Muriel and Alfred—by creating the Outstanding Service Award. And in 2003, BC established the West-Whitelow Award for Humanitarian Service, in tribute to the late Naomi West ’29 and Carlyle Whitelow. The award recognizes alumni who have demonstrated exceptional humanitarian service to their community.

For the last decade or so, Whitelow was widely known as the man with the welcoming wave and wide smile who greeted motorists on Bridgewater’s Main Street every morning from the Dairy Queen parking lot. Frequently he would hold up a sign that read, “You are someone special.”

The Seeds of Goodwill

Dr. Phillip C. Stone ‘65, former president of Bridgewater College and one of Whitelow’s dearest friends, says that Whitelow was one of the most Christ-like individuals he has ever known. He embraced the lessons of good manners and humility his parents bestowed upon him and his brother.

“He was a devoted Christian who took his religion seriously,” says Stone. “He thought he was supposed to love everyone, even people who did not treat him kindly, especially during racial segregation. He rarely missed church on Sunday, regularly studied the Bible and prayed daily. I am sure that he was conscious of the fact that many of the elderly people to whom he ministered in the hospital and nursing homes were of the generation that inflicted the indignities of racial segregation on him and his parents.

“When I asked him about such things,” says Stone, “he beamed that great smile and said, ‘They did what they thought was right. I hold no hard feelings. It’s best to just forget such things.’”

Carter Whitelow, whose father, Alfred, died in 2001, agrees with Stone about the reasons for his Uncle Carlyle’s compassionate nature, and adds Bridgewater College into the mix.

“The Whitelow family owes so much to Bridgewater College, which employed my grandparents and allowed my uncle and father to matriculate at a time when Black people weren’t presented with many opportunities,” he says. “They grew up watching their parents serve Bridgewater College in a loving and dedicated way, and it soaked into their consciences. They liked the way it felt to help other people. They really truly believed that God had put our family on Earth to serve.”

“Carlyle welcomed Suzanne and me to this community just as he had welcomed generations of faculty, staff and students—with joy and care,” says Bridgewater College President David Bushman. “He greeted prospective students and their families with a warm smile at every open house event in the Kline Campus Center. And I would tell those prospective students and their families that what characterizes BC graduates, and what we most hope for them, is living a life of purpose and consequence like that of Carlyle Whitelow—in service to others.”

Whitelow handwrote thousands of letters to people on thousands of topics, even if it was to simply thank them for joining him for lunch. Recipients of those beautifully crafted missives treasured them. A father figure to his nephews Carter and Taylor Whitelow, he wrote each of them a letter every week for 25 years—that’s 2,600 letters.

“He will always live on in your heart,” Carter Whitelow says. “You’re never, ever going to forget him and what he did, and how he made you feel. He’s here spiritually. Sure, it’s all right to grieve—I feel sad every single day that I can’t call him up and talk to him—but our hearts should also be full. If you can feel a person long after they’re gone, physically, then they’re not really gone. And he’s not; he’s up there, right now, watching all this.”