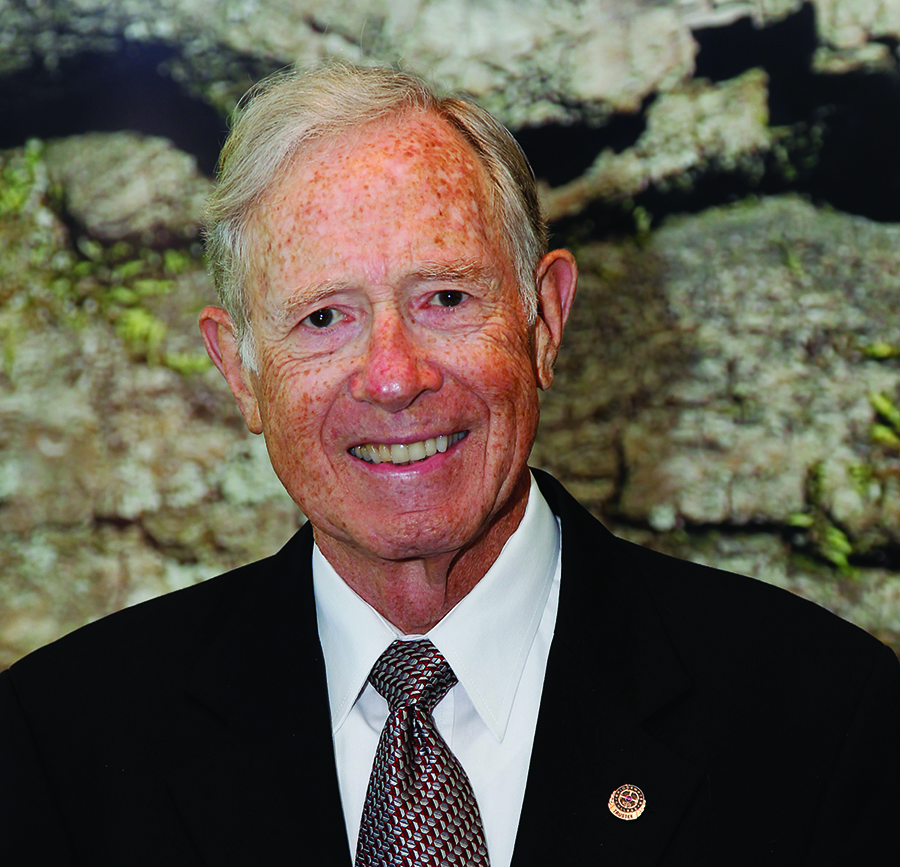 Dr. Joseph Paul Wampler ’54, a beloved and outstanding surgeon, devoted community member and steward of Bridgewater College, died on Sept. 11, 2021, after a 37-year battle with cancer. Wampler was known for his kind, gentle and thoughtful manner toward his family, friends and all who knew him. His wisdom extended far beyond the medical field, and he used his gifts of astuteness and discernment in his roles on several volunteer boards, including as a trustee for Bridgewater College.

Wampler was born May 22, 1933, to the Rev. Guy E. Wampler Sr. ’24 and Ruby Oellig Wampler. He grew up in Bassett, Va., and graduated valedictorian of his class at Bassett High School. His father, a minister at the Mount Hermon Church of the Brethren in Bassett, was a firm believer in education. He encouraged not only his son but several other young people from the Mount Hermon congregation to pursue college educations.

In 1954, Wampler married Priscilla Wakeman ’54, whose great uncle was the College’s founder, D.C. Flory. After marrying, Wampler attended the Medical College of Virginia (MCV), again graduating with honors in 1958. He completed five years of surgery residency at MCV in 1963.

Following the completion of his surgical training, the Wamplers moved to Manassas, Va., where Wampler began his medical career. He established what eventually grew to become the Northern Virginia Surgical Specialists, which now includes Wampler’s son, Dr. G. Benjamin Wampler ’82, who continues as one of five surgeons in the practice.

“He was very kind, gentle and generous, a great mentor in life and a great surgeon to many,” says Benjamin Wampler.

After moving to Manassas, Paul and Priscilla Wampler also became great supporters of the Manassas Church of the Brethren. Both were members of the choir, and Paul served as chair of the church board, in addition to serving on and chairing various committees. His involvement with the Church of the Brethren included service on the general board as well as the standing committee of the Annual Conference. He served as district moderator of the Annual Conference and was a Bethany Theological Seminary Board of Trustees member. His community activities included membership on the board of directors of First Manassas Bank and Trust company, now Wells Fargo, of which he was a founder and organizer.

Since 1971, Wampler devoted enormous amounts of time and energy to being a dedicated member of the Bridgewater College Board of Trustees. He served on the board from 1971-2007 and was a life trustee until his death. Wampler’s fellow board members remember him as an intelligent, contemplative colleague who listened attentively and made quality contributions to any conversation.

“When he spoke, people listened,” says Jim Walsh ’68, board chairman from 2015-21. “He brought common sense, wisdom and experience to the discussion. He did not rush to judgment. He listened, gathered information and then applied his experiences, knowledge and values to reach an opinion.”

Nathan Miller ’65 served as chairman of the board from 2009-15. As a trustee, he says Wampler showed an interest in multiple facets of the College and contributed to the governance of Bridgewater on a wide range of issues and topics.

“He was smart—I mean really smart,” says Jim Keeler ’57, board chairman from 2003-09. “Even though he was a surgeon, he was well versed in business and financial matters. He was one of those who talked in a meeting only when he needed to, and what he had to say was meaningful. If I had to choose a trustee others might use as a model for how to serve and be effective, I can’t think of anyone better than Paul.”

Wampler had a front-row seat to decades of changes at the College, including significant renovations and additions to the campus, the leadership of four different presidents and new programs added to the curriculum.

“He loved Bridgewater College deeply and believed in its mission and purpose, but also understood that it needed to evolve and adapt as society and higher education evolved and changed,” Walsh says. “He understood the durable value of a true liberal arts education and promoted it unceasingly.”

The College’s John Kenny Forrer Learning Commons, a renovation and expansion of the Alexander Mack Memorial Library, opened in spring 2020. Outside of the Forrer Learning Commons is the Wampler Family Plaza, which gives students and faculty a place to read, dine and interact with one another. The Wamplers dedicated the plaza in celebration of six generations of their family’s connection to Bridgewater College. The J. Paul Wampler, M.D. ’54 and Priscilla Wakeman Wampler ’54 President’s Suite in Nininger Hall was dedicated in 2015. And in 2008, the student apartments on Dinkel Avenue were renamed the Wampler Towers. Wampler Towers C was dedicated in honor of Paul and Priscilla, who also received the College’s Outstanding Service Award in 1991.

Wampler and his wife were staunch supporters of the College, not only philanthropically but in attending events and programs at the College—especially the music programs. Wampler received the Ripples Medal in 2012 for his loyal devotion to the College, professional achievements and humanitarian activities, and he was awarded an honorary doctorate of humane letters in 2001.

“Paul was committed to the well-being of Bridgewater College in a profound way,” says Bridgewater College President David Bushman. “Paul never put his personal feelings on any issue above the best interests of the College as a whole. His first—and only—priority in the board room was the mission of the College and the success of our students. A college president could not ask for a better trustee or a more dedicated alumnus.”

In his down time, Wampler could be found on the golf course, where he notably recorded three holes-in-one during his lifetime. He was an avid stamp collector and had an almost complete collection of U.S. stamps.

He and Priscilla loved to travel, having visited all 50 states and 80 countries on six continents. But their most beloved trips were family getaways to their Wintergreen home and an annual trip to Myrtle Beach, S.C. Wampler loved dearly his children and grandchildren and was always a willing playmate for games, puzzles or most any activity suggested.

Bridgewater College’s 2021 commencement ceremony looked different than years prior. Due to COVID-19, the weekend was divided into six separate ceremonies, each one celebrating a different group of students from the classes of both 2020 and 2021. The day was hot, and even though Wampler’s health was failing, he attended the ceremony dressed in cap and gown to witness his granddaughter, Sarah Wampler ’20, walk across the stage.

“I will forever cherish the opportunity I had to speak with him that day,” Walsh says. “He was pleasant and cheerful as always, and I will never forget the image of him sitting proudly, watching yet another Wampler graduate from Bridgewater College.”

Wampler’s legacy of faith, service, wisdom, commitment, loyalty and generosity of spirit will live on in all the communities he served, and especially at Bridgewater College.