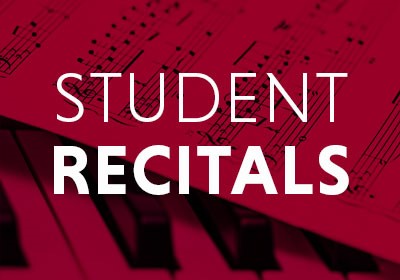 Jacob Bentley and Kalia Page presented a junior recital on March 6 in the Concert Hall in the Carter Center for Worship and Music at Bridgewater College. Due to the COVID-19 pandemic, the audience was limited to students and faculty who were required to wear masks and maintain social distancing.

For his guitar recital, Bentley performed Day and Age by Julian Lage, Lágrima by Francisco Tárrega and Blackbird by Paul McCartney. He also performed Ashokan Farewell by Jay Ungar, accompanied by Richard Adams, adjunct instructor of music at Bridgewater College, on acoustic guitar.

A special feature of the recital was a piece, Loop in E Major, composed by Bentley for electric guitar. Using a looper and delay pedals, he created an echo effect.

Bentley, an environmental science major with a minor in music, is the son of Robert and Annemiek Bentley of Elkton, Va. Bentley is a member of the Jazz Ensemble, a jazz combo and a guitar ensemble.

A special feature of her recital was To Be Continued by Page and Marlon Foster, an adjunct instructor of music, under whom she studies percussion at Bridgewater College.

The recital concluded with Bentley and Page performing Bronze Lady, written and composed originally as Golden Lady by Stevie Wonder. This piece was arranged by Bentley, Page and Michael Brennan, a senior music major from Harrisonburg, Va. For this piece, Bentley performed on electric guitar, Page on drum set, Adams on acoustic guitar and Brennan on bass guitar.

Page, a music major, is the daughter of Ryan and Tiffany Galaz of Stanardsville, Va. Page is a member of the Symphonic Band, the Jazz Ensemble and the National Association for Music Educators (NAfME).