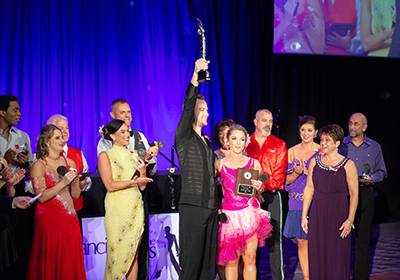 Zach Lokey ’17 never thought he’d be the star of a dancing competition or a top fundraiser. But thanks to his participation in Dancing with the Stars of the ’Burg, he is now both.

Zach Lokey ’17 never thought he’d be the star of a dancing competition. Nor did he ever imagine being a top fundraiser. But thanks to his participation in Dancing with the Stars of the ’Burg, he is now both.

An annual competition that raises money for the Harrisonburg-Rockingham Child Day Care Center, Dancing with the Stars of the ‘Burg concluded its ninth competition in November. Lokey and his dance partner, Libbi Fitzgerald, competed as Team Lokey and took home four out of the five available awards in the competition.

A transfer student from Blue Ridge Community College, Lokey said that Bridgewater College “opened a lot of doors for me.” Following a successful internship at Nielsen Builders in spring 2016, thanks to the recommendation of Chief Development Officer Jim DeLucas ’88, he started at Nielsen full-time in January 2017, after completing all the classes he needed to graduate that May. In his role as Business Development Representative, Lokey engages in public relations and marketing for Nielsen and has become involved in numerous community service activities.

“My community involvement went from about 0 to 100 after I started working at Nielsen,” Lokey said. He co-leads the annual United Way fundraising campaign at Nielsen, serves on the Advisory Board for Build United and the Massanutten Technical Center Foundation Board, and is a community teacher with On the Road Collaborative, leading a 10-week career-learning experience for local middle school students.

His most exciting experience by far, though, has been Dancing with the Stars of the ’Burg. Each year seven local “stars” are matched with an amateur dance partner from the Shenandoah Valley chapter of USA Dance. Lokey was surprised to find he had been nominated, but he knew this was a unique opportunity he couldn’t pass up. “I had never danced before,” he acknowledged. Matched with Fitzgerald and assigned the cha-cha, he and his partner practiced and rehearsed for 14 weeks. It was also Lokey’s responsibility to fundraise during that time. Each team was given the goal of raising $10,000.

After his younger sister, Kayla, suggested holding a purse bingo, Lokey organized his premiere fundraising event, held at the Grottoes Volunteer Fire Department, with two purses—one Kate Spade and one Michael Kors—as the ultimate prizes. He estimated that 140 people turned out for the bingo event, which astonished him and was successful beyond what he could have hoped. He also obtained sponsorships from businesses, family and friends throughout the community.

Sunday, Nov. 11, the night of the main event, was also more successful than Lokey dreamed. Before the dancing began, he received the Children’s Champion award, for the most pre-show donations. He and Fitzgerald received a perfect score for their dance and took home the Judge’s Choice. They were one of three teams that received the Shining Star, for reaching their $10,000 fundraising goal. And at the end of the night, Team Lokey received the mirror ball trophy, given to the night’s Grand Champion, determined by a combination of total donations and dance score. Team Lokey had raised the most money—$25,432—a quarter of the overall total of $100,790.

“I never expected to win anything, much less four awards,” Lokey said. “It was a night I’ll never forget. It was so much fun to be a part of the event and to know that what I’d done was making a difference for the kids and the families in the community. That’s all that mattered to me.”