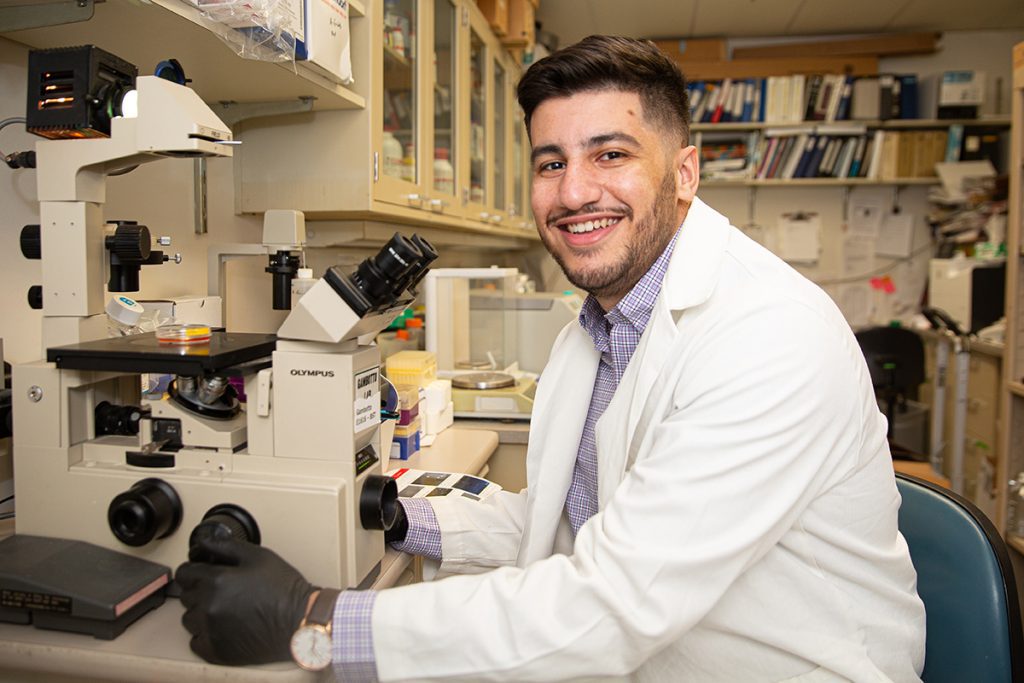 As a Ph.D. student in the infectious disease and microbiology department at the University of Pittsburgh, Muhammad Khan’s work has taken on new meaning during the COVID-19 pandemic. Khan ’19 has worked in one of 12 regional biocontainment laborites in America—a tier three clearance lab that studies highly pathogenic agents that can cause human disease—and has performed research on genome sequencing related to antiretroviral therapy in HIV/AIDS patients. At the onset of the pandemic, Khan joined the laboratory of Dr. Andrea Gambotto, a researcher who has been on the frontlines of vaccine development for SARS, MERS, avian influenza and Ebola.

Khan’s work quickly pivoted to developing COVID-19 vaccine candidates, and in April 2020 his lab published a paper (the first to be critiqued by fellow scientists) on a potential COVID-19 vaccine. The lab currently has multiple vaccine candidates in various stages of development, including one that was awarded funds from the National Institutes of Health to organize a clinical trial.

“It’s been a really interesting experience to be a student and still learning things but also having the responsibility of doing research that we need to get out quickly,” Khan says.

A key attribute to being a successful researcher, a job that requires him to be in the lab up to 12 hours a day, is working independently to solve problems. Khan uses the skills he learned working alongside Harry G.M. Jopson Professor of Biology Dr. Steve Baron on a daily basis. He says the honors research project he completed under Baron’s mentorship his junior and senior years at Bridgewater taught him to take the lead in the laboratory, power through obstacles and develop new methods on the path to discovery.

“The research project I did with Dr. Baron was extremely advanced, and he let me take the reins on it,” Khan says. “As an undergraduate student at Bridgewater you really get to take a focal point on research, and without that experience it would have been more difficult for me to get into any Ph.D. programs.”

Khan, a first-generation college student born in Karachi, Pakistan, came to Bridgewater after being recruited by former head football coach Mike Clark. Originally a health and exercise science major with his sights set on physical therapy, he credits a biology class during his first semester for pushing him toward going to medical school. After working with Baron, Khan found his calling at the intersection of medicine and research in infectious disease work.

“I want to focus on vaccine formulation for diseases that primarily impact those of lower economic status,” he says.

Khan’s current doctoral research is doing just that. In Gambotto’s lab, he is also working on a subunit vaccine with a dissolvable microneedle array patch loaded with the spike protein from SARS-CoV-2. The patch is put on like a Band-Aid and dissolves painlessly on the skin. All the vaccines Khan is working to develop would cost significantly less to make than the current mRNA vaccines on the market ($1-5 compared with $15-20 per dose), and refrigeration requirements would be the 4 degrees Celsius found in home refrigerators. Although he calls the mRNA vaccines “modern miracles,” he points out that lower- and middle-income countries with low vaccination rates and who have barriers to access are in need of additional options.

“There’s a really big gap in vaccine equity that we’re trying to fit ourselves into,” he says. “I’m thankful to be part of this research team, and if it wasn’t for the entire biology department at Bridgewater I wouldn’t be doing any of the amazing research I’m doing now.”