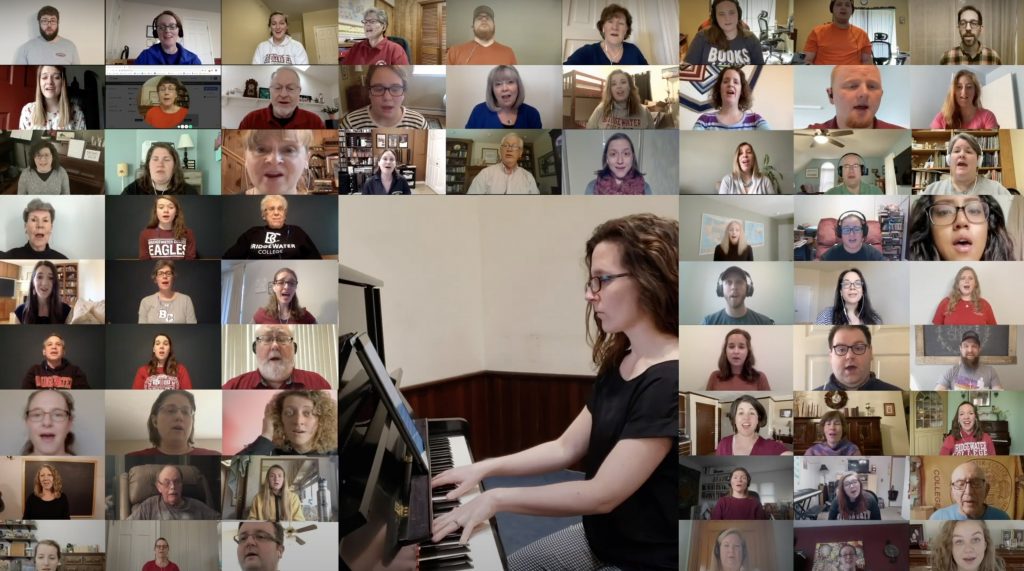 Early in the days of adjusting to distance learning and working from home, Dr. Christine Carrillo, Associate Professor of Music at Bridgewater College, saw musical groups putting together performances online. Participants recorded videos at home by themselves, but the editing process resulted in an entire ensemble singing together in beautiful harmony. She was inspired to do something similar at BC and felt the obvious choice was “Bridgewater Fair,” the College’s alma mater, originally written by John Wayland in 1902.

“I wanted to help our students still feel connected to each other,” Carrillo said. “Then I thought, ‘What if we added in anyone who wanted to participate?’ Faculty, alumni …” Carrillo posted an announcement on the Bridgewater College Music Facebook page and emailed current students, faculty, alumni and anyone she could think of who might be interested.

“I just think it was a really great way to show how Bridgewater is still being a community, even when we’re apart,” Jenna Hallock ’20

The response was immediate and enthusiastic, with more than 100 volunteers initially. Carrillo contacted the Bridgewater College Office of Marketing and Communications to figure out the technical side of putting the clips together and asked Lacey Johnson ’07, Instructor of Music and frequent choral accompanist, to record herself playing the music on the piano.

In the end, 63 singers were included in the final video, which was posted on BC’s social media channels on April 13. Just 10 days later the video had reached more than 28,000 people on Facebook with nearly 7,000 engagements. It was easily the College’s most popular social media post in 2020 to date.

Senior music major Jenna Hallock ’20 recorded from her home, along with her grandmother, mother, father and older sister, all of whom are BC alumni. “I just think it was a really great way to show how Bridgewater is still being a community, even when we’re apart,” she said.

Johnson said she was delighted to see “Dr. [Jesse] Hopkins and all the alumni I hadn’t seen in so long” in the final video. As the pianist, she set the tempo for the recording and was a critical component of getting everyone united on the same key and timing. Matthew Cosner, Photographer and Digital Content Creator in the Office of Marketing and Communications, said it was his first experience editing a virtual music ensemble, but he loved the work of piecing it together and making sure the tracks lined up.

Carrillo said she was thrilled with the way the video turned out and the response it received. She thought it lifted everyone’s spirits, especially the current students finishing out the semester remotely.

“Bridgewater Fair” gave alumni and students a way to come together at a time when people felt isolated and provided a way for them to be a part of something bigger than themselves.