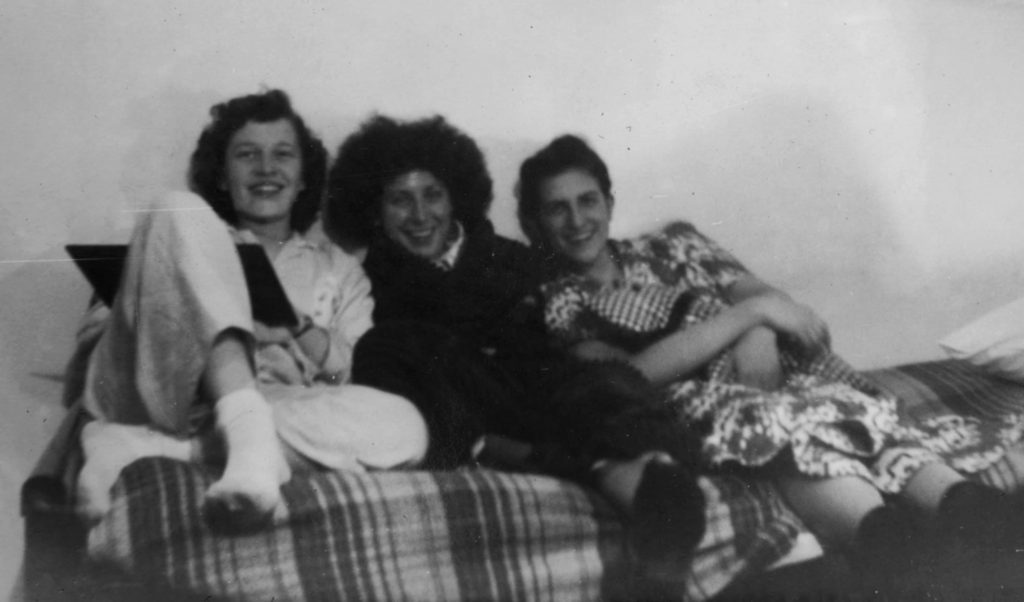 This spring’s COVID-19 pandemic was not the first time Bridgewater College responded to such a situation with resolve and resiliency. Glimpses into Bridgewater College’s Special Collections tell how Eagles met infectious diseases of the past with bravery, community spirit and humor.

The first test of College mettle came in 1884. Historian Francis F. Wayland wrote that the Virginia Normal School (Bridgewater College’s predecessor) was closed most of March 1884 due to an outbreak of scarlet fever. (Scarlet fever is a bacterial illness now treated by antibiotics.)

Zigler and Beahm were part of a close group of friends at BC whom Zigler said always “stuck together.” They were such good friends, in fact, that when one of the women was quarantined with scarlet fever, the whole group went to visit her. While viewing Beahm’s photograph album, Zigler laughed at the memory of all of the women hiding in their friend’s closet. They must have been caught, however, because Zigler said they all ended up in quarantine together. (The student with scarlet fever made a full recovery.)

At least one photograph of the friends happily relaxing in loungewear while isolated together appears in Beahm’s photograph album (photo shown at top, courtesy of BC Special Collections). Beahm wrote that snacking was a huge part of quarantine life (some things don’t change!), and Zigler recalled that potato chips and sour pickles were two of their favorites.

Although scarlet fever was a threat of the past, COVID-19 is most often compared with the 1918 “Spanish” flu pandemic. At least 50 million people worldwide died from the flu, with young people among the highest casualty rates. Around 16,000 Virginians are believed to have perished from the illness.

Classes were cancelled for three weeks in October 1918 due to the prevalence of the flu. Some holidays, including Christmas vacation, were cut out or cut shorter to make up for the lost instruction time. The fall term closed two days later than originally planned and the spring term started early, according to the December 1918 Bridgewater College Bulletin. The campus was again locked down in January 1919, when the flu became prevalent in the town of Bridgewater.

In November 1918, The Philomathean Monthly editors wrote that nearly 80 percent of the students at the College escaped the virus and none of the students who contracted it fell seriously ill. The December 1918 Bridgewater College Bulletin reported: “There were not more than a few dozen cases among the students.”

Bridgewater College had built and furnished a modern two-story infirmary in 1916 with funds from the Alumni Association. Students infected with the flu were promptly isolated there. The new infirmary had a suite for a specially trained nurse who worked alongside Miller and Yount Hall matron Mary S. Barnes to care for the ill during the 1918 pandemic.

Like Beahm and her quarantined friends in the 1940s, the 1918-1919 Bridgewater College students seemed to have relied on their social connections and good humor to combat the boredom and stress of isolation. “Although we have been quarantined … we are by no means lonesome …“ wrote the editors of the January 1919 The Philomathean Monthly. Campus news told of how female students hosted a social event to entertain their peers. Healthy students enjoyed each other’s company within the campus lockdown, though then, as now, the status of athletics was undetermined. The College’s popular annual Bible Institute was cancelled that year.

Although nobody on campus died from the 1918 influenza epidemic, sadly, some members of the extended Bridgewater College family did succumb. The December 1918 Bridgewater College Bulletin contains a memorial page, including the names of four College associates who died that October.

Carey F. Miller, a 1912 Bridgewater business course graduate, died from flu-related pneumonia Oct. 14, 1918, while serving as a hospital apprentice during World War I at the Hampton Roads Naval Base. He was posthumously awarded the Navy Cross for working diligently to care for other flu patients at the hospital where he later died. Miller, a Bridgewater farmer, had enlisted in the United States Naval Reserve in June 1918 (see story below).

Robert Linwood Kendig of Stuarts Draft, Va., was likely a student at Bridgewater College around 1907. He was the son of an influential early Bridgewater College Trustee, the Rev. Emanuel D. Kendig. Robert had married the year before he died. A son, also named Robert, was born six weeks before the elder Kendig died at 29.

Nettie M. Waggy Bennett, wife of Isaac Bennett, also a BC graduate, was 24 when she succumbed to the flu. Like Kendig, she had a young son at the time of her death.

Sadly, the preceding and following months brought even more losses off campus, both from the war and from the pandemic.

Those were certainly difficult times, but throughout it all, Bridgewater College remained solid. And our history shows that it was close community connections that provided much needed strength and support. Eagles got through those hard times by relying on each other, and we will undoubtedly do the same.

Carey Francis Miller, “Cay” to his friends at Bridgewater College, was a native of the Bridgewater, Va., area. He was born in July 1893, the son of local farmer Eugene X. Miller and his wife, Elizabeth Bowman Miller.

In 1904, Miller and his brother, Houston, were listed as students in the English-scientific course at the Bridgewater Academy, a college preparatory school that operated at Bridgewater College until 1924. Miller was admitted to the academy as a special non-degree seeking student.

Miller graduated from the Bridgewater College business course of the College’s Commercial Department in 1912. The 1911-12 College catalog also records Miller as enrolled in the shorthand and typing course. Miller’s friends spoofed his rural upbringing and jovial personality in his Bridgewater College senior profile. The word “nonsense” was used more than once by his classmates to describe young Miller.

After finishing his studies at Bridgewater College, Miller went to work on his father’s farm for several years. But the advent of World War I ignited Miller’s patriotic duty, as he enrolled in pharmacy school with plans to perform military medical work. After graduating from the Medical College of Virginia’s two-year pharmacy program in June 1918, Miller enlisted in the U.S. Naval Reserve in Norfolk, Va.

The young business graduate worked as a Hospital Apprentice First Class, U.S. Navy at the Hampton Roads Naval Base hospital. He was noted for working tirelessly day and night among those who had fallen ill with influenza. Sadly, Miller himself contracted the virus, and he died at the hospital, early in the morning on Oct. 14, 1918—just four months after he began his service. According to College historian Francis F. Wayland, Miller was the third Bridgewater College man to lose his life in WWI service.

Miller’s work took substantial courage. The Centers for Disease Control and Prevention estimates the 1918-1920 influenza pandemic caused about 675,000 U.S. deaths and more than 50 million deaths worldwide. Hardest hit were healthy young adults, among whom the flu caused devastating pneumonia and cardiovascular damage. Then, as now, many medical workers were overwhelmed. According to the Naval History and Heritage Command, 5,027 U.S. Navy personnel died of the illness.

Though Miller was a civilian, the U.S. government honored him posthumously by awarding him the Navy Cross for his distinguished service. Miller was one of only seven individuals to receive this honor for work in Naval hospitals during the 1918-20 flu pandemic. And he was the only apprentice among the group of military and medical professionals to receive the award.