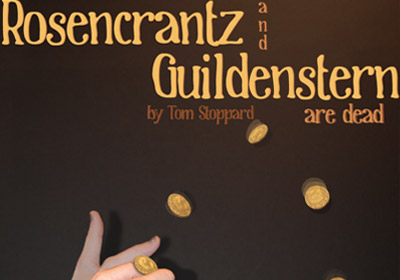 Rosencrantz and Guildenstern Are Dead is co-directed by Dr. Scott W. Cole, associate professor of theater at Bridgewater College, and Angela R. Tolomei, a senior theater major, from Hanover, Pa.

Rosencrantz and Guildenstern Are Dead is the inventive tale of Shakespeare’s Hamlet as told from the worm’s-eye view of the bewildered Rosencrantz and Guildenstern, two minor characters. This Shakespearean Laurel and Hardy finally get a chance to take the lead role, but do so in a world where reality and illusion intermix and where fate leads the two heroes to a tragic but inevitable end.​

Gabriella B. Signor, a first-year liberal studies major, from Grovetown, Ga.; and

Elizabeth A. Sites, a sophomore mathematics major, from Shipman, Va.