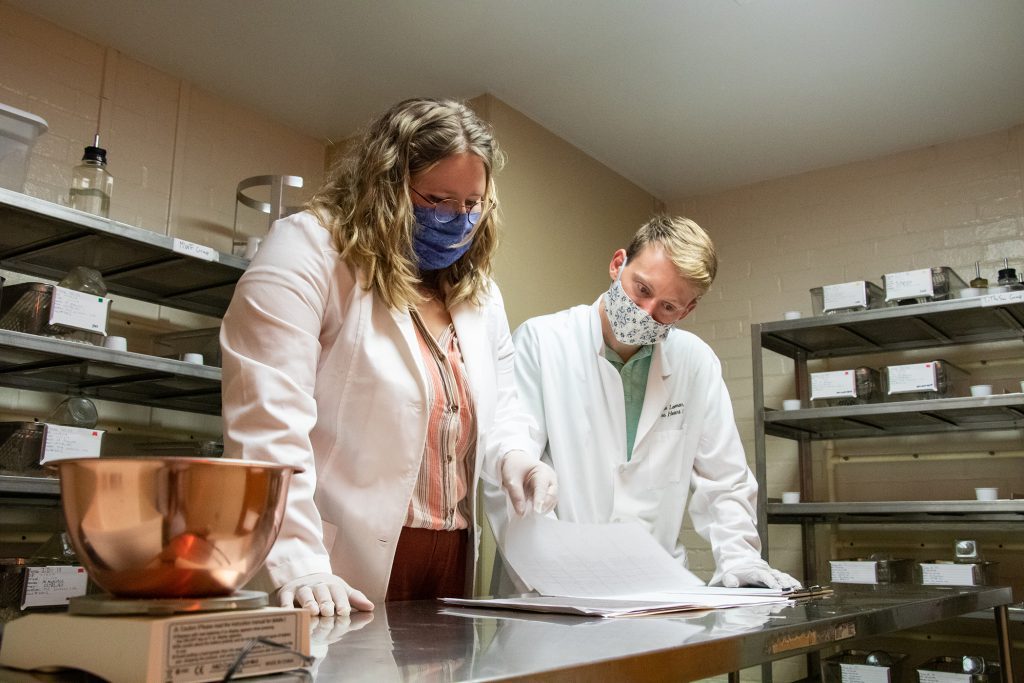 It likely comes as no surprise that caffeine is the most widely consumed psychoactive substance in the world. Almost 90 percent of people ingest caffeine each day, whether in the form of a morning cup of coffee or an afternoon pick-me-up cup of tea.

Caffeine is so ubiquitous, in fact, that it has found its way into less-obvious sources, including waffle mix, chewing gum and alcoholic beverages. Dr. Curtis Bradley ’09, Assistant Professor of Psychology, and Kynah Walston ’21, spent the summer and fall studying caffeine consumption in mice when paired with another reinforcer such as saccharine (a sugar substitute) or alcohol. Their research project, “Effects of Gender and Gustatory Reinforcers on Effects of Ethanol and Caffeine Self Administration in Mice,” was funded with a 2020 Dr. John M. Martin Summer Research grant.

The student-faculty research pair’s project is an extension of Bradley’s research focus at East Tennessee State University (ETSU), where he received his Ph.D. in philosophy and experimental psychology in 2017. Bradley’s research at ETSU showed that animals will self-administer caffeine at a higher rate when paired with another reinforcer such as saccharine (animals do not self-administer caffeine on its own). He then turned to the mesolimbic dopamine system, the rewards circuit of the brain, for more answers. When caffeine was consumed by itself, it did not enhance dopamine levels, but when caffeine was consumed and animals were shown a reward, their dopamine levels spiked. Thus, caffeine worked to prime the reward system, which could serve as a model as to why humans might overconsume caffeine-containing products, including a focus of Walston and Bradley’s research: products containing both caffeine and alcohol.

The summer research project studied four groups of mice: saccharine-alone, caffeine-alone, caffeine and saccharine combined, and caffeine, saccharine and alcohol combined. Walston ran the groups of mice in operant boxes every other day in two one-hour sessions (the mice were run on alternate days due to caffeine tolerance). The mice were trained to push a lever in the box to receive a reward, which was the substance being studied in that group. Bradley and Walston expect to find that caffeine is a reinforcement enhancer, meaning the mice will work harder for alcohol or saccharine or both when they are combined with caffeine.

Walston and Bradley ran the mice at different concentrations of caffeine to produce a dose response curve to give a clear picture of how the drug affects behavior. They expect to find low to moderate doses of caffeine have the biggest effect on motivation for self-administering a substance.

“Research like this could help inform public policy, to help people understand that combining alcohol and caffeine together isn’t safe for a multitude of reasons,” Bradley said. “One reason is that whether you realize it or not, caffeine and alcohol are working together to continue consumption to higher levels than what you may consume if it was just one of those substances by itself.”

As the only research assistant working on the project, Walston gained invaluable real-world experience. She was involved with every aspect of the project, from caring for the mice, to training them how to use the lever rewards system, to documenting their behavior. Walston plans to attend graduate school for psychology and said the research experience she gained at Bridgewater will undoubtedly help her in the future.

“I doubt I would have gotten this much independence in a lab and this much actual hands-on experience if I had gone to a larger school where I would have just been another face in the crowd,” she said.

Walston and Bradley performed phase two of the project this fall, during which they studied the remaining groups of mice: alcohol-alone, alcohol and saccharine, and caffeine and alcohol combined. They hope to present their research project at Bridgewater’s ASPIRE (A Celebration of the Arts, Scholarship, Performance, Innovation and Research Excellence) in the spring, as well as at a regional conference in Tennessee. Bradley credits his own undergraduate research experience at Bridgewater, in which he served as lab manager for former psychology professor Dr. Brian Kelley and presented at a conference, with inspiring his interest in research and psychology. He said working with students such as Walston outside of the classroom allows for additional interactions and new avenues of learning.

“Kynah is an ideal student: She’s attentive, motivated and interested in what we’re doing,” he said. “It’s been very easy to let her take some of the reins and see that she can run this lab in the same way a graduate student would. I know she’ll be a strong graduate student and strong peer one day.”

Learn more about Research at BC