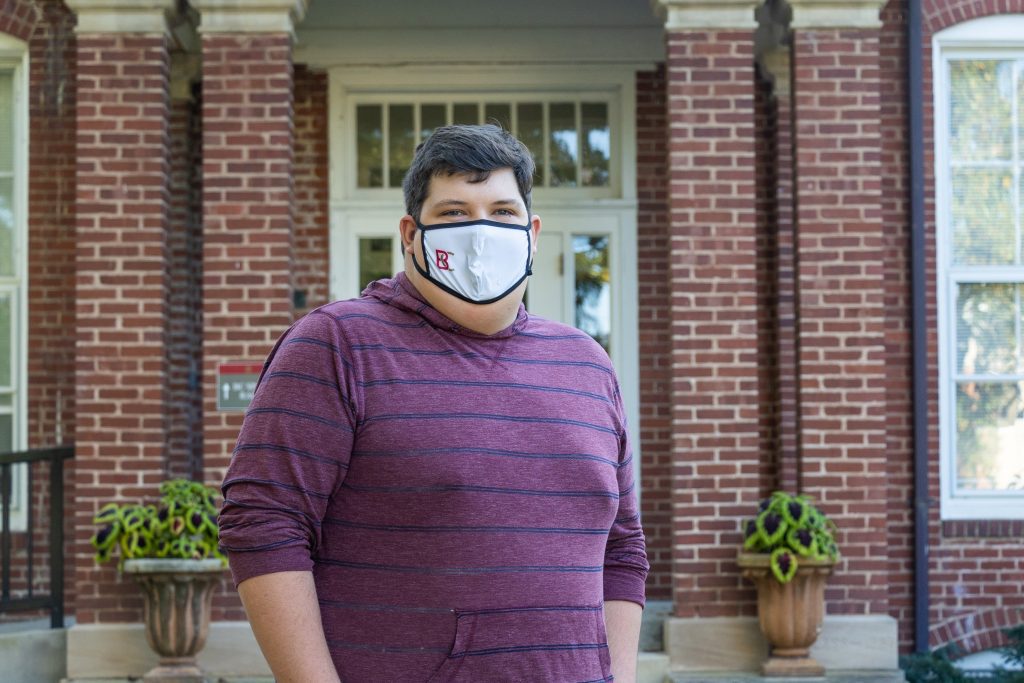 Jacob Smith ’21 was drawn to Bridgewater College because it was different from other colleges he visited. That difference—the connections he made while visiting the college and taking a tour of the Bridgewater campus—led him to the decision to make BC his home for the next four years.

“The connections with faculty, staff and students are something which I do not believe you could get many places,” Smith said. “Everyone on campus was so friendly and helpful. Everyone is on a first-name basis, and there is no feeling that you are ‘just a student.’”

Remembering his own college search process, Smith desired to share with prospective students who were visiting BC’s campus the same kind of experience of connecting with current students and faculty.

With encouragement from his friends, Smith, a communication, technology and culture major, joined the Student Ambassador Association during his sophomore year.

“My friends pushed me to get outside of my comfort zone,” Smith said.

One of Smith’s roles as a Student Ambassador is to give prospective students and their families a campus tour. His goal is to show Bridgewater College as they would experience it if they were students.

“My job is not to convince [prospective students] Bridgewater is where they need to go, but to show them what Bridgewater has to offer,” Smith said.

Through giving campus tours, Smith has improved his public speaking skills and has gained the ability to think fast on his feet. He also served on a student panel during an orientation session for parents—a slightly intimidating crowd—in a packed Nininger Hall.

“Speaking in front of families on a weekly basis is one way to work on your public speaking skills,” Smith said. He has also gained confidence in his leadership abilities by conducting training sessions for other Student Ambassadors on how to give successful campus tours.

The outbreak of the COVID-19 pandemic has caused Smith to change the way he gives campus tours. Before each tour, he completes the LiveSafe app, uses hand sanitizer and puts on a mask. He also asks his guests to wear masks during the tour and to maintain social distancing.

Smith’s role as a Student Ambassador and his connections with the Office of Admissions staff led him to pursue an internship with the office for the 2020 fall semester, which he was awarded after an interview process.

Two of Smith’s classes have provided him with skills that he has translated into his work in Admissions—Strategic Public Relations, taught by Communication Studies Professor Ady Dewey, and Graphic Design, taught by Art Professor Ron Alabanza. Smith has gained valuable experience during his internship by creating visually interesting emails for prospective students.

Smith’s internship supervisor, Communications Coordinator Megan Henry, said, “During the pandemic, emails, texts and mailings have been major ways for [Bridgewater] to connect with prospective students. Jacob has shown his ability to participate on a team, and use his problem-solving and critical-thinking skills.”

In addition, Smith has played an active role with BCVoice, the student-run news organization. During the last three semesters, he has completed practicums with BCVoice, gaining real-world experience through writing articles, planning events and working with social media and visual reporting.

For his dedication in helping to launch BCVoice 360, a series of student videos that bring attention to the organization’s website, Smith was awarded BCVoice of the Week in November 2020.

As part of his senior project during the 2021 spring semester, Smith has plans to reimagine BCVoice 360 with a new brand.