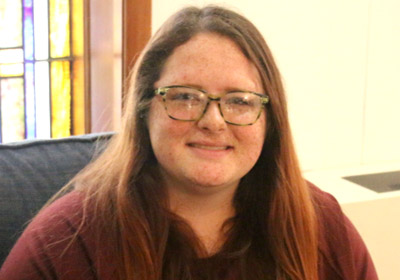 Alisha and her mom, Jaime Whetzel, a 1998 graduate of Bridgewater College, were on their way home from Jaime’s job in pharmaceuticals, when another car attempted to pass them. A driver coming in the opposite direction caused the passing car to swerve back into the right lane. Realizing they were going to hit at the exact spot where Alisha was sitting, Jaime swerved off the road, went through a guardrail and hit a tree. She was pronounced dead at the scene.

The crash is one of Alisha’s earliest memories. “I remember that pretty vividly,” she said.

“I thought my mom turned around and said, ‘It’s okay. Everything’s going to be okay.’ Later I told my grandma that an angel sitting beside me said that.”

“I remember the cop came and got me out of the car and I looked at him and said, “my mommy’s dead, isn’t she?” Alisha continued. “And he said yes. We sat on the sidewalk and cried together.”

For several months following the death of Jamie at the age of 24, Alisha’s dad and her maternal grandparents, Lynne and David Redmon, shared partial custody.

Kicking and screaming, Alisha made it very clear that she did not want to go with her dad when he would come to pick her up. Finally, her grandparents decided they would not put her through that anymore. As a result, Alisha’s dad was no longer a part of her life and she was raised by her maternal grandparents and her aunt, Deanna Whetzel Shirk, a 2002 graduate of BC.

Desiring to learn more about her mother, Alisha followed in her mom’s footsteps and chose Bridgewater College.

“I wanted to see if any of the professors remembered my mom, so that I could get stories about her and what her college experience was like,” Alisha said.

As a first-year college student, Alisha was unsuccessful at finding anyone who remembered her mom.

During her sophomore year Alisha had a concern about a class and was not sure how to navigate her way. She was referred to Joanne Harris-Duff, who was Director of Advocacy and Diversity at the time.

While they were talking, Alisha mentioned that her mom went to BC.

Joanne asked when her mom graduated. Alisha responded with 1998, the same year that Joanne graduated from BC.

Joanne said, “Immediately my eyes filled up, and I said, ‘You are little Alisha. You are Jamie’s daughter,’ and she responded ‘yes.’”

Joanne went on to tell Alisha that she and Jamie were good friends. They were both part of a group of hallmates that were very close to each other. Joanne was there for the birth of Alisha, Jamie’s wedding and her mom’s funeral.

By then, both were crying, hugging and taking a photo together.

With Alisha’s permission, Joanne sent the photo to the other members of the group, and shared Alisha’s wish to have photos and stories about her mom as a college student. The group immediately responded with more than 60 photos and some videos of her mom.

“My grandparents had a fire in the house,” Alisha said. “We had a couple of pictures, but not very many. It was really fantastic to get those pictures and videos.”

“When Jamie told us she was pregnant, we were really excited,” said Joanne. “Sometimes people start families and may not finish school. That was so not Jamie. She started. She finished. She was doing homework. She was super smart with math and science skills. She graduated on time. Alisha comes from a really strong place of resilience.”

“I am a strong believer in my faith, so I think God had divine guidance in bringing Alisha and me together,” added Joanne.

Now that they have made the connection, Alisha and Joanne want the relationship they have developed to continue after Bridgewater College.

Alisha has special ways of keeping her mom’s memory alive. During Alisha’s senior year of high school, her grandma created a blanket using Alisha’s T-shirts from playing softball, basketball and volleyball. On the back of the blanket is a T-shirt that Jaime bought for Alisha that says “Property of Bridgewater.”

In addition, Alisha has a bear made from one of her mom’s nightgowns and wears Jamie’s high-school class ring on a chain around her neck.

Alisha has learned valuable lessons through this experience, such as helping others when they are hurting.

She said, “Learning to live with adversity has helped me become a better person. When I see other people hurting, I can try and help. I have learned that it is okay to be sad. It is okay to cry. You are going to have good days and bad days. It is important to take time to talk about it.”