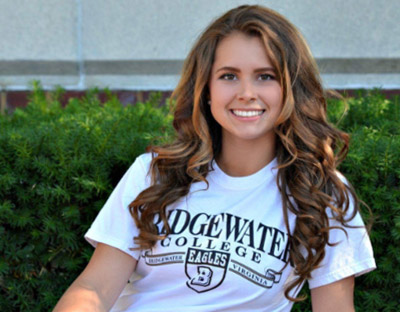 Lindsey Hensley’s mom remembers sitting in the car crying after receiving the final diagnosis of her newborn daughter being severely to profoundly deaf. Lindsey’s parents, Jeff and Laurie Hensley, felt overwhelmed and hopeless.

Lindsey Hensley’s mom remembers sitting in the car crying after receiving the final diagnosis of her newborn daughter being severely to profoundly deaf. Lindsey’s parents, Jeff and Laurie Hensley, felt overwhelmed and hopeless.

“Both of my parents were thinking about everything that I would miss in life,” said Lindsey, “such as birds chirping, music, talking and everyday life sounds.”

“They were also worried about my future,” Lindsey added.

“Within a few weeks, they were referred to the Virginia School for the Deaf and Blind (VSDB) for early intervention services,” Lindsey said. “I attended VSDB full time at 18 months old.”

Lindsey and her parents also began to learn sign language and later her younger sister, Emily, started signing as a toddler.

At the age of 4, Lindsey received a cochlear implant that changed her life.

“I had an internal piece surgically implanted under the skin on my right ear,” Lindsey explained. “One month later I received the external piece that rests behind my right ear and is held in place magnetically.”

The cochlear implant made a dramatic change for Lindsey, as she went from hearing nothing to experiencing sounds that were loud and strange. “I could hear my parents talking to me and the air conditioner running,” she said.

Adjusting to the implant took some time.

According to her mom, Lindsey would take the implant, put it in a plastic bag and throw it outside. This happened a couple of times with her mom finding the implant after several hours of searching.

Lindsey added, “I rely on my cochlear implant every day. I occasionally use lip reading and sign language when I need more clarification around new people.”

Also at the age of 4, Lindsey’s parents enrolled her in public school, McGaheysville Elementary, where she entered kindergarten for socialization skills.

“I went from a class of three students to a class of 20,” Lindsey said.

She stated, “I had an interpreter from the start of transferring to public school due to my inability to hear and speak legible spoken language.”

“Without an interpreter, it is very difficult to follow each word that a professor is saying in the classroom,” Lindsey added.

She also wants people to know that they should not be afraid to speak to her, as the cochlear implant aides in her ability to hear them.

“I am part of the hearing world/community, and I prefer to communicate orally,” Lindsey said.

As a third-grader, Lindsey’s mom enrolled her in recreation cheerleading for football games.

“I absolutely hated it and would cry at almost every practice and refuse to get out of the car,” Lindsey recalled. “I told my mom that I was never doing cheerleading again.”

Lindsey added, “I love being active, so I decided to try out for cheerleading again in eighth grade. I fell in love with it.”

Lindsey carried this love of cheering into her college experience by becoming a member of BC’s football cheerleading squad during her sophomore year.

Lindsey said, “I believe that people can do anything—even in the face of fear.”

As a varsity cheerleader during the fall of her junior year at East Rockingham High School, Lindsey participated in the Regionals Cheerleading Competition. If the squad finished in the top four, they would qualify for the Virginia High School League (VHSL) Cheer Championships.

The announcer called “East Rockingham Eagles” and the squad sprinted onto the mat.

“As we got into our positions, shockingly my cochlear implant turned off,” she said.

“Remember, I cannot hear anything without my cochlear implant. I had my eyes wide open and fear on my face. I looked toward the crowd and spotted my mom sitting in the bleachers and my interpreter near the cheer mat. I gave them a warning sign, and they both knew what had just happened. They both calmed me down by signing and lip reading.”

“I thought to myself, ‘I can do this.’ The captain of the team began to count, ‘5, 6, 7, 8’ and we started cheering. As I was moving to different spots on the mat, I watched my interpreter closely to make sure my timing was perfect.”

“Even though the beginning was scary, I also had the best feeling that I have ever experienced because I completed the whole routine without hearing one beat of music.”

“I will never forget what I went through and how I was successful on that important day in my life.”

Gaining confidence, Lindsey decided not to have an interpreter while cheering during her senior year of high school. The squad placed second in the state competition during her junior and senior years. During her senior year, Lindsey was one of the few members of her team to earn first All-State Cheerleader, the highest individual award presented.

“It is important for everyone to understand that whatever challenges you have to go through,” Lindsey said, “just keep going and think positive. With dedication and hard work, anything is possible.”