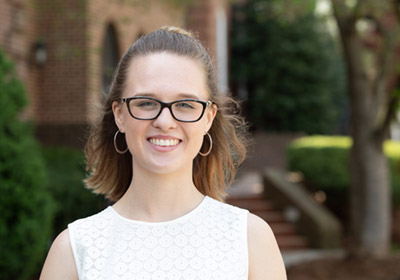 As a student at Bridgewater College, McKenzie Melvin ’21 discovered that an opportunity to engage in one study abroad experience could serve as a springboard for participating in future trips abroad that improved her communication and leadership skills.

A global studies major with a minor in Spanish, Melvin built a connection with Dr. Jamie Frueh, Professor of History and Political Science and Director of the Center for Engaged Learning, through taking a class he taught. As a result, she decided to travel to South Africa during the 2018 May Term engaged learning experience that Frueh was leading.

This experience led to an opportunity to participate in the Barzinji Project, a collaborative, grant-funded program to honor the life and mission of Jamal Barzinji, an American citizen with a passion for higher education and international collaboration.

During the 2019 spring semester, Bridgewater College was looking for two student delegates to participate in the Barzinji Project, a partnership of faculty, staff and students from BC, Shenandoah University and two international universities. Bridgewater President Dr. David Bushman invited Melvin to participate in recognition of her leadership as Vice President of the Student Senate and her proven reputation of engaging in intercultural experiences.

The theme for the 2019 Barzinji Project was “The role of the university in civil discourse.”

Speaking with representatives from the student government at the University of Sarajevo, Melvin learned that the primary civil discourse in Bosnia focused on the civil war that took place in the 1990s.

“They [the students] were dedicated to the mission of not letting go of the war, but at the same time desiring to move forward from it using civil discourse to get the three majority ethnic groups to start speaking to each other,” Melvin said.

At the IIUM, the mission is about Islamization, using revealed knowledge from the Quran to explain human knowledge.

“In Malaysia, the challenge for civil discourse was this tension around questioning what the Quran said and not wanting to break from conservative tradition,” Melvin said.

The Barzinji Project wrapped up with a fall colloquium at Shenandoah University in September 2019 and included the four partnering institutions.

Melvin participated on multiple public panels and shared her experiences as a student visiting the University of Sarajevo and the IIUM.

While in South Africa, Bosnia and Malaysia, Melvin cultivated interpersonal and intercultural communication skills that have aided in her leadership development. For the 2019-20 academic year, the student body elected Melvin to serve as President of the Student Senate.

“Her interactions with student leaders at the University of Sarajevo and the International Islamic University of Malaysia provided perspectives that have made her a better student body president,” Frueh said. “As a campus leader, she has translated her experiences into expanded opportunities for all BC students to understand and appreciate global similarities and differences.”

As president of the student organization, Melvin has been challenged to create an environment in which all senators and all perspectives are not only heard, but also listened to and respected.

“Having these experiences abroad have helped me improve my ability to communicate with my fellow students, faculty and staff who have had different experiences than I have,” Melvin said. “I feel more confident in my active-listening skills and in engaging with my peers to solve complex problems. A lot of individuals have a lot of really wonderful ideas about how we can improve our organization and the lives of other students.”

This year, Melvin, along with the members of the senate, have been busy amending the constitution and bylaws to allow the student government to transact business more effectively and better represent the student body. The senate has also organized individual and group advocacy efforts to improve the lives of students on campus.

“The senate is hoping to begin organizing a larger-scale mental health advocacy effort on campus, along with other campus partners, during spring semester,” Melvin said.