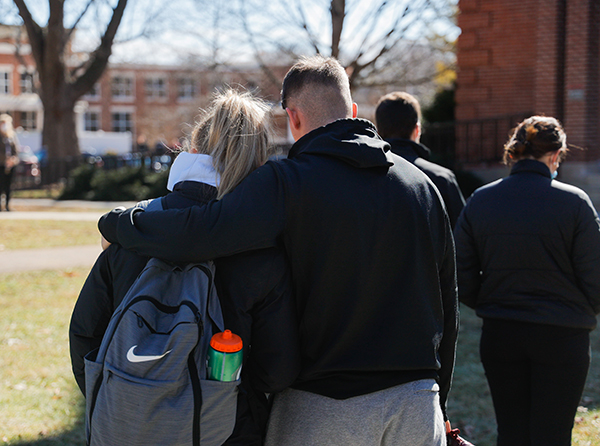 Those who live and work in Bridgewater see it as a connected, caring place with a unique sense of community that manifests itself in a sort of call to action.

Home to a small, private liberal arts college of about 1,500 students, the peaceful town was rocked by tragedy two weeks ago. On Feb. 1, Bridgewater College police officer John Painter and campus safety officer Vashon “J.J.” Jefferson were killed in a shooting on campus. The suspect was caught and is facing murder charges. No possible motive has been disclosed.

In the following days, prayer vigils, impromptu memorials and other ways to honor the slain officers have arisen at the college and broader community.

Three days after the shooting, Bridgewater Town Manager Jay Litten released a statement titled, “The Need for Hope and the Hope of Love.” In it, Litten wrote that while the pain of the shooting will linger and the community grieves, a message of hope, love and community togetherness will prevail.

To end the message, Litten wrote: “I simply believe in our power to walk through the horror and emerge on the other side—the Bridgewater Way. Together.”

At Bridgewater College, there is a “sense of belonging” that is distinctive, campus Chaplain Robbie Miller ’79 said.

“I think the reason many people feel such loyalty to the college is because they do feel like part of something bigger than themselves,” Miller said.

To Miller, the Bridgewater Way is “a culture of community and caring.”

“The responses that I’ve received from former students and I’ve seen on social media certainly confirm that Bridgewater College is deeply loved by many who have attended and worked here over the years,” Miller said.

Megan Byler ’06, assistant town manager for public works for the town of Bridgewater, said it was “amazing” how the community has pulled together after a tragedy that rocked its world.

“We take care of one another,” she said. “We are going to be here for each other in whatever capacity is necessary.”

A lot of hope is shining through the darkness, Byler said. She noted the community’s support of law enforcement, appreciative of their service. Outside Bridgewater’s Town Hall, yard signs show support for the College and law enforcement.

“The Bridgewater Way is the community pulling together and taking care of one another,” Byler said.

“Bridgewater is special—it looks to the future,” Harris said. “We come together for a common cause.”

An attractive thing about Bridgewater, Harris said, is the quality of life in the town.

“The Bridgewater Way is a sense of connectedness,” Harris said.

In an era of division, a sense of togetherness and family transcends that in Bridgewater, Harris said. In view of the tragedy, it was demonstrated by an outpouring of support from the community.

“It’s a needed and special attitude as to where we are in today’s age,” he said.

Sometimes, it’s cliché to say a community is “tight-knit,” said Liz Howley, Associate Vice President for Student Life at Bridgewater College. But, at BC, the connections and bonds formed remain strong, and students become friends for life.

“We definitely use the words connection and community a lot,” she said. “That’s the heart of it.”

Jefferson and Painter had meaningful relationships with those they knew, Howley said, whether it was giving rides to students or meeting them for lunch.

“John and J.J. weren’t just friendly—they had relationships with people,” she said.

“Bridgewater has a funny way of flying under the radar, and once you get here, you realize how great it is,” Howley said.

She likened BC to a “best kept secret”—a humble, resilient experience that keeps students and community members invested and loyal to the area and the College. For some, Bridgewater “is in their genetics,” citing generations of students in some families.

“That doesn’t happen everywhere,” Howley said. “I’ve been here about five years, and I can’t imagine working someplace else. I get why people stay forever.”

BC football head coach Scott Lemn said the Bridgewater Way is a sense of community and connectedness, one that focuses on the individual and being the best version of yourself.

“Bridgewater College is not my alma mater … but a place I’ve called home the last 12 years,” he said. “The connection is real.”

The college is a “community inside a community,” one with a strong relationship between students and faculty, he said.

Though the campus is hurting, the outpouring of support has helped the community grieve, he said.

“While it’s part of our history, it’s not our identity,” Lemn said of the shooting. “Our identity is community, connectedness, resiliency.”

The men that officers Painter and Jefferson were and their commitment to service won’t be forgotten, Lemn said.

In Bridgewater, when you see someone in need, you step up and help them, said Katie Newman, parks coordinator for the town of Bridgewater. The Bridgewater Way was embedded in both Jefferson and Painter.

“It embodies what Bridgewater is,” she said.

Newman said the Bridgewater Way is going above and beyond for your family, community and neighbors to provide a wonderful life and service to others before yourself.

Knowing the community has people like Jefferson and Painter, along with local police departments protecting the area, Newman said it makes her even more appreciative to call Bridgewater home and raise a family there.

“I have immense gratitude for our police officers who run into danger to keep our community safe,” she said.

Bruce Christian P’06 knew BC was a special place the minute he and his son, David, stepped foot on campus in 2001 for a college tour.

“They’re there for each other,” said Christian, chair of BC’s board of trustees. “The Bridgewater Way.”

Over 3,000 people attended a memorial service for Jefferson and Painter at James Madison University’s Atlantic Union Bank Center last week. Prayer services and vigils have also been held in the community within the past two weeks.

“What I’ve seen over these last 14 days has been the resiliency of this community, the oneness of the community,” Christian said.

People matter at BC, Christian said, noting the “very personalized” nature of the campus.

“We all come together and gather together, but rather than disperse at the end, we talk to one another,” Christian said. “I don’t see that everywhere.”

The morning after the shooting, more  than 100 people gathered at the school’s Carter Center to sing the school’s song, “Bridgewater Fair.”

“‘Bridgewater Fair’ will never mean the same thing to me after hearing it Feb. 2,” Christian said.

Assistant Professor of Music and Choral Director Ryan Keebaugh ’02, who organized the event, said there’s a deeper connection between students and faculty at Bridgewater College.

“Students are students by name; they’re not by number,” he said.

The Bridgewater Way is caring for one another, he said.

Faculty members care about what their students are going through, what they’ve been through and how they are doing, Keebaugh said. Relationships at BC are built for life and continue after graduation.

“As the economic development adviser, I’ve gotten to see behind the scenes for some of our businesses, and I’ve just been so impressed not only with the business efforts, but the joint effort of the businesses and the community,” Gottfried said.

During the shooting, a few BC students ran and took shelter at Sugar and Bean Cafe in Bridgewater, said store owner Heather Benin. As a lifelong Valley resident, Benin said she was in shock and disbelief, and wanted to do something to support the community and further the role of togetherness. The Friday night following the shooting, the cafe stayed open after hours for students only, offering snacks and coffee and inviting students to come together off campus.

“We made the business feel like a place that felt comfortable and safe,” Benin said.

In a small community, people just wanted to find ways to provide support however they could, she said. The business also created a “hero sub” for a short period of time after the shooting, dedicated to Jefferson and Painter.

“We were hurting as a community,” Benin said.

Karen Luster, owner of Karen’s The Prissy Country Girl in Bridgewater, said the people of Bridgewater are “so kind and so welcoming.” She said she also wanted to support Bridgewater any way she could, and her store is selling stickers and hearts where all proceeds go to the officers’ memorial fund.

“Bridgewater is my Hallmark town,” she said, noting how friendly and supportive the people of the town are.

As the two-week mark of the shooting passes, porch lights in Bridgewater are blue in support of law enforcement.

“Those efforts have been so heartening in the midst of something so tragic, to see people come together and support one another, and to support law enforcement,” Gottfried said.

*This story originally ran in the Feb. 15, 2022, edition of the Harrisonburg Daily News-Record