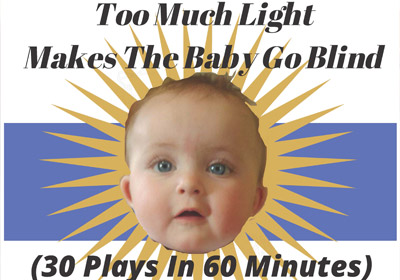 Too Much Light Makes the Baby Go Blind by Greg Allen is an ensemble experiment in presenting “30 Plays in 60 Minutes.”Production dates are Feb. 20-23.

Performances are at 8 p.m. Feb. 20-22 and at 3 p.m. Feb. 23. Tickets are $10 for adults and $8 for seniors over age 65 and non-BC students. Tickets will be available at the door 30 minutes prior to the start of the performance. This production is for mature audiences.

Too Much Light Makes the Baby Go Blind is co-directed by Dr. Scott W. Cole, associate professor of theater at Bridgewater College, and Catherine M. Downing, a senior English and theater double major, from Eldersburg, Md.

The production is an ensemble experiment in presenting “30 Plays in 60 Minutes.” Each two-minute play is performed in random order with an interactive audience. The plays are comic, tragic, political, personal and abstract, as well as funny and thought-provoking.

Kylee A. Lorio, a junior political science and leadership double major with a minor in theater, from Newmanstown, Pa.;

Victoria L. Callahan, a senior sociology and communication, technology and culture double major with minors in peace studies and theater, from Bloomsburg, Pa., is serving as stage manager.