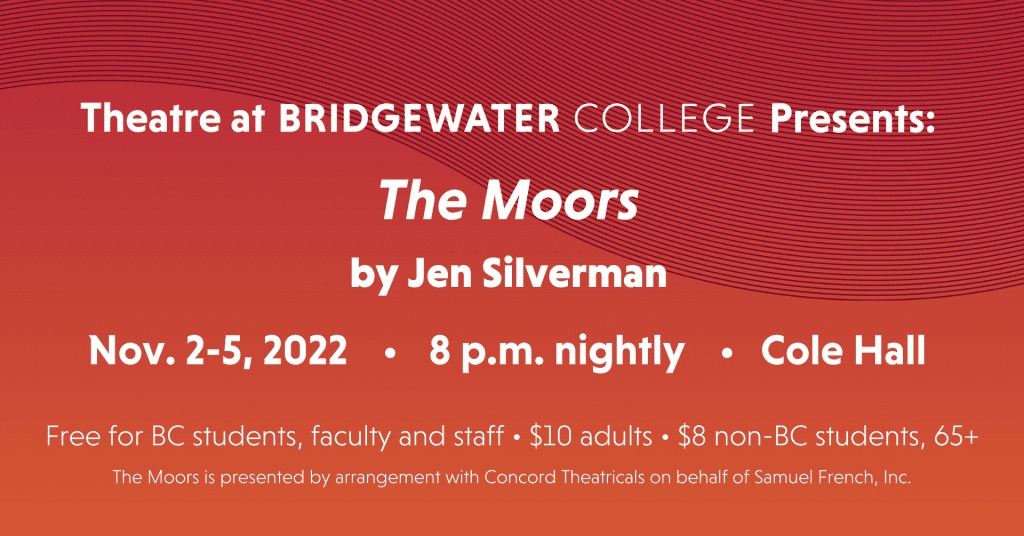 Theatre at Bridgewater College will present The Moors by Jen Silverman from Wednesday, Nov. 2, through Saturday, Nov. 5, in Cole Hall on the College’s campus. The show will begin at 8 p.m. each night.

Silverman’s The Moors tells the story of two sisters and a dog that live out their lives on the bleak English moors dreaming of love and power. The arrival of a hapless governess and a moorhen set all three on a strange and dangerous path. The Moors is a dark comedy about love, desperation and visibility.

The production is open to the public. Tickets are $10 for adults, $8 for seniors ages 65 and older and non-BC students, and free for BC students, faculty and staff. The show is recommended for mature audiences.

Jessica Arnold ’23, a communication, technology and culture and psychology double major from Middletown, Va., as Marjory

Karis David ’24, a family and consumer sciences major from Annapolis, Md., as Emilee

Adam Lorfink ’23, a psychology major from Kearneysville, W.Va., as Mastiff

Kenzie Ragland ’26, an undecided major from Staunton, Va., as Moorhen

The Moors is directed by Scott Cole, associate professor of theatre at Bridgewater College, with Piper Dallimore ’25, a digital media arts major from Rippingale, England, as assistant director.

The Moors is presented by arrangement with Concord Theatricals on behalf of Samuel French, Inc.

AT A GLANCE
Theatre at Bridgewater College Presents: The Moors by Jen Silverman
When: Wednesday, Nov. 2, through Saturday, Nov. 5, 8 p.m. nightly
Where: Cole Hall
Tickets: $10 for adults, $8 for senior (65+) and non-BC students, free for BC students, faculty and staff. Tickets will be on sale 30 minutes prior to showtime, cash or check only.
Notes: The Moors is presented by arrangement with Concord Theatricals on behalf of Samuel French, Inc. Mature audiences recommended.