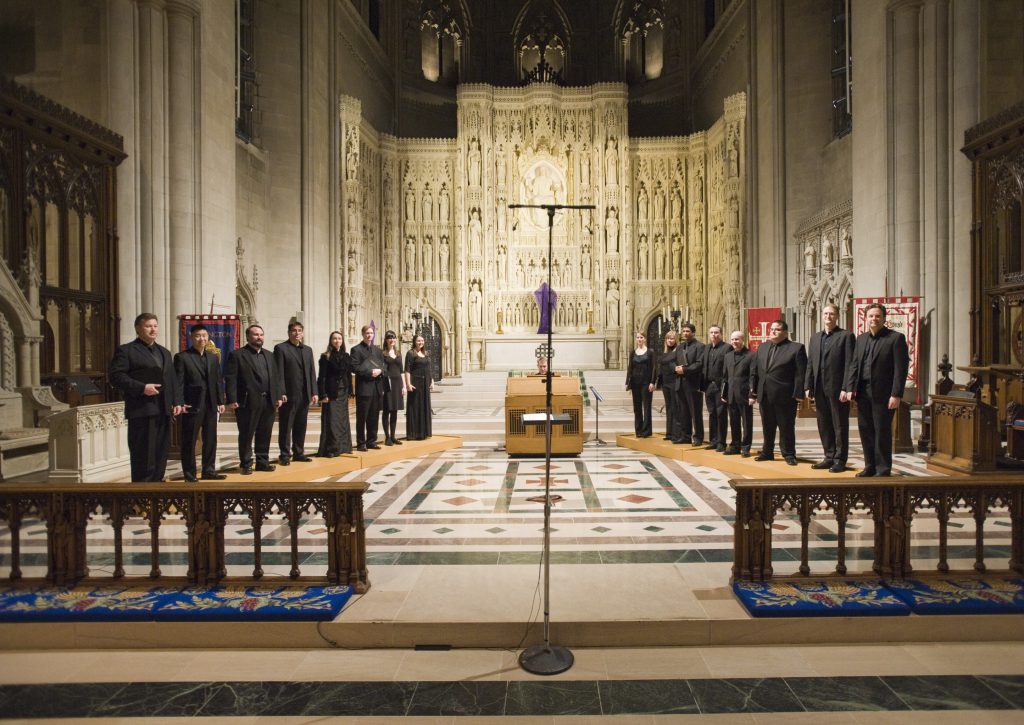 Cathedra, a highly skilled ensemble of professional singers resident at the Washington National Cathedral in Washington, D.C., will be performing at 7 p.m. Friday, March 25, in the Concert Hall at Carter Center for Worship and Music on the College’s campus. The program, “Miserere mei, Psalm 51,” will feature five settings of “Miserere mei, Deus” by different composers, including a world premiere of “Wash Me Thoroughly,” a newly commissioned work by composer and music educator Dr. Trevor Weston. The concert, made possible by a generous donation, is free and open to the public.

Specializing in music of the Renaissance and Baroque while championing the modern-day composer, Cathedra, under the artistic leadership of Canon Michael McCarthy, is dedicated to bringing sublime expression to music across the ages. Exploring new boundaries of both repertoire and presentation, Cathedra tailors its programming to offer authenticity and originality that is both unique and compelling.

In addition to the performance, members of Bridgewater College’s Concert Choir will have the opportunity to work alongside the professionals during their time on campus. McCarthy, the cathedral’s Director of Music, will lead a workshop for the students in which he will offer insight and feedback on the choir’s current repertoire, followed by Concert Choir sectional work with members of Cathedra.

“This will be a choral experience that the students will reflect upon for many years after leaving Bridgewater College. The opportunity to work with professional musicians and ensembles outside of Bridgewater adds a delicate degree of depth of musical experience and nuance that will enhance each student’s view of what it means to be a serious choral musician,” says Dr. Ryan Keebaugh, Assistant Professor of Music and Choral Director at Bridgewater College.

Music has always been an important part of the benefactor’s life. “Seeing professional musicians like the National Cathedral choir, which has performed for the Queen of England and the Dalai Lama, is so inspiring,” says the donor, who wishes to remain anonymous. “You always look to the best and try to learn from them. This partnership between the National Cathedral choir and Bridgewater College students is important because if students are able to engage with such tremendous talent, their talent will improve.”

This gift also covers the opportunity for Bridgewater’s Concert Choir to travel to the National Cathedral in Washington, D.C., to participate in the Choral Evensong program on May 1. That service will begin at 4 p.m. and is also free and open to the public.

Cathedra’s March 25 performance centers on settings of Psalm 51, which is one of the penitential psalms in the Book of Psalms in the Old Testament. In the text, King David of Israel confesses his sins to God and pleads for forgiveness. The psalm is regarded as a model for repentance in both Christianity and Judaism.

The program will also feature a world premiere of Weston’s setting of Miserere mei, Deus, “Wash Me Thoroughly.” Weston, currently Professor of Music at Drew University in Madison, N.J., and teacher in the MAP/Pre-College programs at the Juilliard School, initially heard Allegri’s Miserere mei, Deus during his first visit to St. Thomas Church, in New York, N.Y., where he would later sing as a boy chorister.

“I think this is what God is,” Weston says of his reaction to the work.

Weston centers his setting on the motif of cleansing, beginning with the verse “Wash me thoroughly from my wickedness”—a verse that appears near the beginning of King David’s prayer—and connects it to the plea to “make me a clean heart, O God.”

“Using the ‘power of the psalm’—a genre that is central to the cultural heritage of the British West Indies, his family’s homeland—to ‘reflect how humans experience things,’ Weston connects us to tradition while championing a worldview released from its constraints,” says Washington National Cathedral Concerts and Operations Manager Beatrice Dalov. “His setting redefines the psalm’s historical and liturgical associations, recontextualizing its emotive strife within quintessentially American aesthetics evocative of the nation’s traditions, cultures and political discords.”

“Everything needs beauty and pain. Something that’s really beautiful is also a little painful,” Weston says.

The Detroit Free Press describes Weston’s music as a “gently syncopated marriage of intellect and feeling that mesmerizes and entrances its listeners by creating a sense of suspended reality.” Numerous ensembles have performed his compositions, which incorporate a variety of music styles: gospel, jazz, blues, ragtime, minimalism, avant-garde and African American vernacular.

Weston’s honors include the George Ladd Prix de Paris from the University of California, Berkeley, the Arts and Letters Award in Music and a Goddard Lieberson Fellowship from the American Academy of Arts and Letters, and residencies from the Virginia Center for the Creative Arts, the MacDowell Colony and Castle of Our Skins at the Longy School of Music. He also won the first Emerging Black Composers Project sponsored by the San Francisco Conservatory of Music and the San Francisco Symphony.

AT A GLANCE
Cathedra Concert
When: 7 p.m., Friday, March 25
Where: Concert Hall, Carter Center for Worship and Music, Bridgewater College’s campus
Note: The concert, “Miserere mei, Psalm 51,” is free and open to the public.