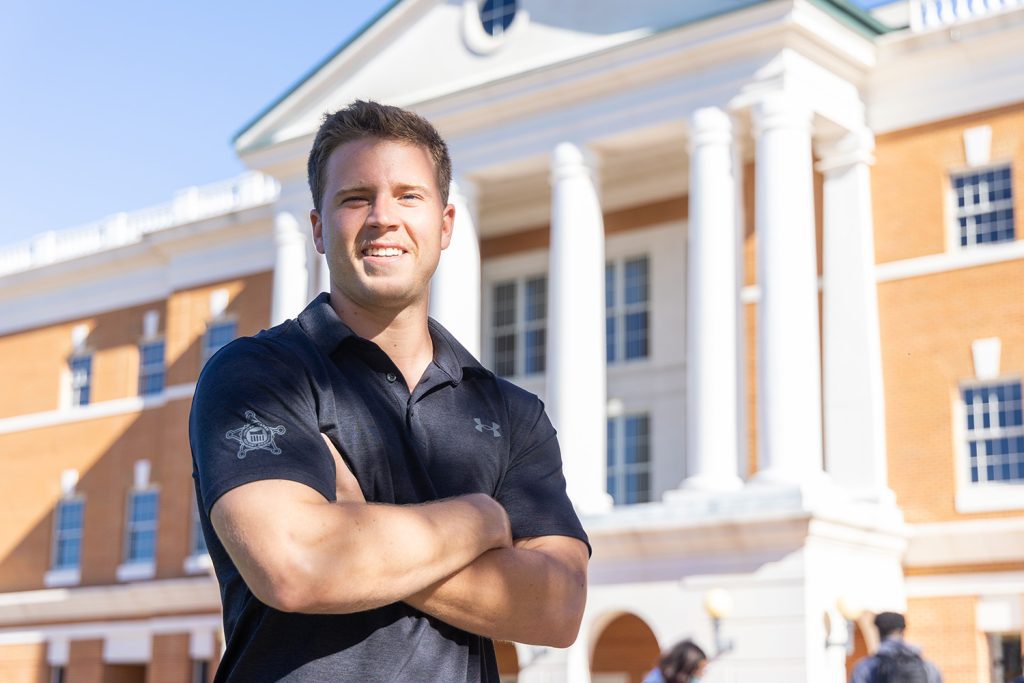 An athlete throughout high school, Alex Schwind ’22 was used to challenging himself physically. When he began his college search, he knew he wanted a place where he could continue playing lacrosse but push himself academically as well. As he toured both large universities and small colleges near his hometown of Loudon County, Va., he realized he would excel best in a liberal arts environment with smaller class sizes. Bridgewater College quickly rose to the top of his list after an overnight with the lacrosse team, with which he connected immediately.

As someone perennially interested in historic events and their impact worldwide—Schwind’s earliest memories are of watching 9/11 and World War II documentaries on The History Channel—the global studies major was a perfect fit. The addition of a criminal justice minor further aided Schwind in his career goal of working in federal law enforcement.

“I want to do something for the greater good,” says Schwind.

His global studies classes and professors have expanded his knowledge of world events and ignited a drive to continually learn more. Over the summer, he read six books on Afghanistan after taking a class on Afghanistan with Associate Professor of History and Political Science Dr. Brandon Marsh. He credits being part of a diverse liberal arts environment for introducing him to people of different backgrounds and beliefs, and says serving as the Student Athletic Advisory Council representative for the men’s lacrosse team and organizing the team’s first volunteer project in the George Washington National Forest improved his leadership skills.

“At Bridgewater, everyone elevates each other to be the best version of themselves. That’s hard to find,” he says.

Schwind credits his coaches, professors, friends and parents with supporting him and helping him evolve as a person. His mother, Debbie, is a huge inspiration, as she went back to school and received her Ph.D. after surviving stage 4 head and neck cancer. She’s cancer-free today.

“I wouldn’t be the person I am without them,” Schwind says.

Internships have also played an integral part in Schwind’s growth. In the summer of 2020, he worked as a security intern with In-Q-Tel, a nonprofit venture capital firm created by the CIA in 1999 that invests in companies that develop cutting-edge technologies to serve national security interests. There, he assisted the security team and led the effort to digitize personnel files and security records. Through his connections with that company, Schwind applied for an internship with the United States Secret Service—his dream job.

Schwind still remembers the moment he received word that he’d be interning with the global security organization.

“I was so happy to be part of something bigger than myself,” he says.

While interning with the Secret Service, Schwind was exposed to a multitude of jobs within the organization with a dual mission of protection and investigating financial crimes. From an area near the White House that is closed to the public, Schwind watched President Joe Biden fly in on Marine One. He participated in investigation work related to counterfeit money, cyber crimes and credit card fraud. And during threat assessment analyses prior to visits from foreign dignitaries, Schwind discussed current and historical events in other countries with Secret Service agents. He surprised himself with his level of knowledge.

“It was unbelievable to see what I could bring to the table during those conversations, and I think a lot of that was from the education I’ve had at Bridgewater,” he says.