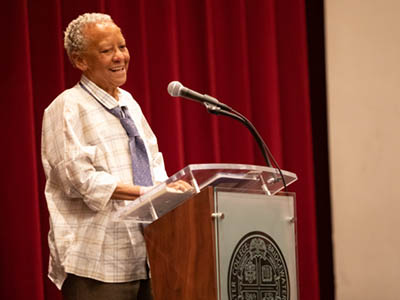 Nikki Giovanni, a world-renowned poet, activist and educator, had the audience roaring with laughter at times during her hour-long endowed lecture, featuring stories, jokes and readings of select poems.

“You don’t have to agree with me, but you know I’m right,” joked Nikki Giovanni as she spoke to a full house of close to 600 people in the auditorium of Cole Hall Monday night. The audience of students, faculty, staff and community members came out on a frigid evening for the final event in Bridgewater College’s celebration of Dr. Martin Luther King Jr. The endowed lecture, “An Evening of Poetry, Love and Enlightenment,” was sponsored by the W. Harold Row Symposium on Reconciliation.

Giovanni, a world-renowned poet, activist and educator, had the audience roaring with laughter at times during her hour-long talk, featuring stories, jokes, colorful opinions and readings of select poems. She paid tribute to all those who struggle and want a better life, reminiscing about growing up with her grandparents and not knowing if they would have enough coal to heat the house.

She talked about her love of football and pointed out with appreciation the BC football players in the audience. She reminisced about teaching various Virginia Tech football players, and one of the poems she read referenced a disagreement she had with some of her own students at Tech. A University Distinguished Professor at Virginia Tech, Giovanni clearly has a great deal of affection and love for her students and was delighted to speak to a crowd including many students at Bridgewater. “Be careful what you do for money,” she warned them, reminding them that what you do and how you treat people makes a difference.