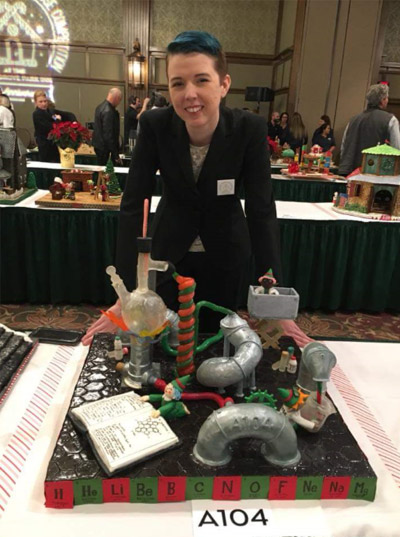 Meghan Morris, a Bridgewater College junior from Apex, N.C., will appear Dec. 17 on the Food Network as a competitor in the annual National Gingerbread House Competition.

Meghan Morris, a Bridgewater College junior from Apex, N.C., will appear Dec. 17 on the Food Network as a competitor in the annual National Gingerbread House Competition.

Morris, a biochemistry and Spanish double major, is no stranger to the competition, which is held in Asheville, N.C. She has entered it six times since the age of 16, placing in the top 10 three times – twice in the Teen Category and once in the Adult Category. The program, titled “Gingerbread Giants,” in which she vies with other bakers from around the country, will air Dec. 17 at 9 p.m.

“Being filmed for the Food Network was so surreal,” she said. “I never would have imagined that I’d be asked and selected to be on the show. I grew up watching the Food Network, and the cake and decorating competitions were always my favorites. When they showed up to film me at Bridgewater the film crew was so nice and they made me feel like a star!”

She said that even when certain pieces she was making began falling apart, or sugar started to burn and molds didn’t come out the way she wanted, her one consolation was that people across the nation were going to get a good laugh out of it.

“I try to not take myself too seriously in the competition because it’s just gingerbread, after all, and there’s no sense getting upset about it when something breaks,” she said.

Morris said her tryouts for the National Gingerbread House Competition have become a family tradition, with everyone staying at a hotel the night before and “hanging out the next day while we wait for the judging to end and the awards ceremony to begin.”