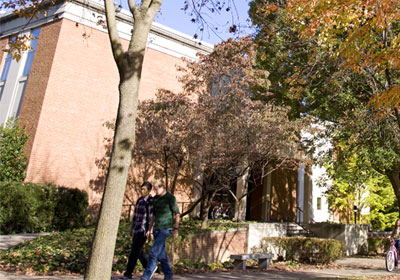 Citing a long-standing commitment to give back to the community, five Smith family members and the Smith-Midland Corporation (SMC) have donated $1 million toward the expansion and renovation of Bridgewater College’s library.

Citing deep, life-changing experiences at Bridgewater College and a long-standing commitment to give back to the community, five Smith family members and the Smith-Midland Corporation (SMC) have donated $1 million toward the expansion and renovation of the college’s library.

Their donation is the third seven-figure gift in Bridgewater’s march toward what will become the John Kenny Forrer Learning Commons. The $1 million gift of Rodney Smith, his four sons Ashley, Roderick, Matthew, and Jeremy and the Smith-Midland Corp. will name the first-floor café in the building the Smith Family Learning Commons Café.

Rodney Smith is chairman of the board and co-founder of SMC. He has served on the college’s board of trustees since 1980 and was named a life trustee in 2011. Ashley, class of 1985, is president and chief operating officer and Matthew, class of 1989, is vice president of sales and marketing and president of subsidiary Concrete Safety Systems. Roderick, who also attended Bridgewater College, is General Manager of Smith-Carolina (NC), and Jeremy is building products manager of Easi-Set Worldwide, both subsidiaries of (SMC). All have been supporters of Bridgewater throughout the years.

“Rodney and his family have long been great supporters of the college, and I am honored that they have chosen to so generously support future generations of our students,” said Bridgewater College President David W. Bushman. “The Forrer Learning Commons melds studying and learning with interaction and collaboration. A café and meeting place is central to this concept of collaborative learning and communication, and the Smiths’ generous gift will make it a reality.”

“The last four generations of my family have been members of the Midland Church of the Brethren, and we were taught to give back to the Church and the community whenever we could,” said Rodney Smith. “In the Smith Family, it’s a philosophy of philanthropy that we have carried with us throughout our lives, and we, along with the Smith-Midland Corp., are especially pleased to provide a financial contribution to the Bridgewater Library renovation project partly because Bridgewater College was founded by leaders of the Church of the Brethren, and remains affiliated with the Church today.”

But the generosity of the Smiths toward Bridgewater College also springs from positive personal experiences family members had as students. Ashley cited small classes, focused, individual attention from professors and a diverse student body as central to their successes in life.

“Although Bridgewater was a relatively small school when I went there, the students came from a wide variety of backgrounds and life situations,” said Ashley. “Because it was a small school, you got to know almost everyone, or at least you knew who they were. You learned how to get along with people who were different from you in all kinds of ways—and that has helped me in my role in sales, and now as president of Smith-Midland. We deal with a host of different people, and I think the practice I had at Bridgewater has assisted me in my career.”

Matthew echoed the words of his brother, and noted that Bridgewater also provided a platform for leadership development.

“I became involved in many facets of campus life, particularly the organizations, and quickly became a leader in them,” he said. “I don’t feel that I would have been as involved if I had gone to a bigger school. Bridgewater allowed me to get involved and become a leader, and ever since I graduated I’ve been a leader in most of the things I’ve done. Bridgewater definitely helped prepare me and lead me in that direction.”

Roderick and Jeremy each said the school has a special place in their hearts. As Jeremy noted, “When I visit the campus, it feels very comfortable, even for someone who didn’t attend,” he said. “A large part of our connection to Bridgewater relates to the Church of the Brethren, and to the ethos of giving it teaches. That ethos has been passed along to us from one generation to the next, and we all want to give back because we have been very blessed.”

The Smith Family Learning Commons Café will feature lounging spaces highlighted by a fireplace and designed to bring campus constituencies together for interaction and learning in community. In addition to the café, this next-generation library will offer private study spaces, indoor and outdoor learning and gathering spaces, and group meeting rooms throughout the building, promoting interaction among community members.

The Smith family and Smith-Midland Corp. gift joins a $4 million commitment from Bonnie and John Rhodes to name the facility the John Kenny Forrer Learning Commons and a $2.5 million grant from the Morgridge Family Foundation that names the Morgridge Center for Collaborative Learning, which will occupy the main floor of the facility.

Fundraising for the Forrer Learning Commons will continue, with the intent to break ground in May of 2018 for a formal opening of the building in August of 2019.