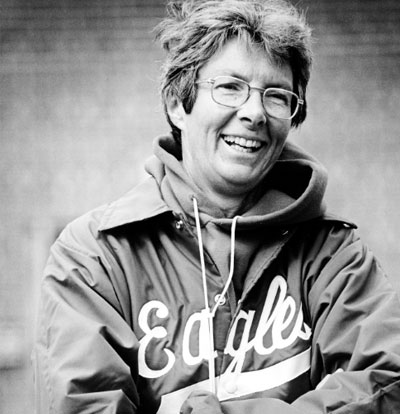 Many an Athletic-Hall-of-Fame coach can boast winning records season after season, but few shaped their student-athletes’ lives in the profound way that Coach Laura Mapp did.

Many an Athletic-Hall-of-Fame coach can boast winning records season after season, but few shaped their student-athletes’ lives in the profound way that Coach Laura Mapp did.  An extraordinary person by any measure, Miss Mapp, as she was known by her students, inspired Bridgewater College alumni to strive to live as she does: with integrity and compassion.

Mapp, who came to Bridgewater in 1963, coached women’s basketball, field hockey and tennis at the College for 35 years. Her tireless energy is legendary: In addition to coaching, she served as athletic director and taught a full load of classes.

Though she’s now retired, Mapp continues to touch new generations. Through her actions, she modeled the “Mapp Way,” a road map that has guided her students and players throughout their lives. They, in turn, shared this map with their students, players and others, extending Mapp’s legacy.

Purkey played basketball, field hockey and tennis for Mapp and went on to teach, coach and work in academic administration for 40 years. “Coach Mapp has a foundation of integrity that she combines with understanding, empathy, competence and amazing energy. She is more than memorable, she is life changing,” she adds.

“She established the basis for my teaching and coaching philosophy and it served me well over my entire career.  I was a better coach, teacher and—most of all—a better person from my time with Miss Mapp and at Bridgewater.”

Purkey remembers a game against Lynchburg College that illustrates one of the “Mapp Way” qualities—her ability to stay calm and focused, even in the heat of competition.

“I was on the sideline trying to inbound the ball when I was shot in the backside with a cap gun,” she says. “My initial reaction was to turn and bash the ball into the face of the idiot who shot me. But, as I began to turn, I caught a look from Miss Mapp sitting on the opposite side of the gym. She didn’t say anything, just gave me a look. I quickly inbounded the ball, and we moved on.”

Mapp’s coolness under fire was a constant throughout her coaching career. Playing 25 years after Purkey, Melody Derrow Hinkle ’91, a technology education teacher says, “Coach Mapp never yelled and rarely raised her voice. But you knew when she raised her hand and started shaking her pinky she meant business. I can still see her shaking her pinky at the referees after a bad call against BC.”

Coach Mapp was the consummate professional who gave her all to every task, no matter how small. “Besides my parents, I do not know any other individual who demonstrates such an exemplary work ethic,” continues Hinkle. “She was a tireless worker doing even the smallest, menial tasks like picking up trash she saw as she was walking across campus.”

Sharon Will ’75 agrees. Will played basketball and field hockey under Mapp and went on to teach and coach for 36 years. “Besides my parents, Miss Mapp was the most influential person in my life. I learned how to teach and coach following her leadership style. Her professionalism was always an important part of her mentoring. Working hard at practice, treating officials and other coaches with respect, and coming to games prepared, were all lessons I learned from Coach Mapp.”

“Treating others with respect” was a central tenet of the “Mapp Way.” Her day-to-day behavior exemplified how to interact with others. “Miss Mapp taught us how to treat our students and players when we became teachers and coaches,” says Deb West Windett ’76, who played basketball and field hockey for Mapp and went on to teach and coach for more than 40 years. “She treated us like her kids. We would invite ourselves to her house for a real breakfast. (Of course, she got up at 5 a.m., so we had to get there early.) She baked treats for our long van rides to games and everyone went to her office for hot chocolate in the morning before 8 a.m. practices.”

“If you were sick, she checked up on you in the dorm. If you had a problem, she talked to you or sent you a note to pump you up,” continues Windett. “All her players remember those notes that always ended with her signature, ‘Take Care, Miss Mapp.’ I have kept many of those notes.”

That genuine care and concern was evident every day. Because of that, “There was not a player or student of Miss Mapp’s—including the men who were students in her classes—who would not do anything for her,” says Ginny Snuggs ’72, who played basketball and field hockey and coached, taught and was in administration for a total of 43 years.

“She inspired me to persevere, to be tough, to be honest, and to push myself toward excellence in every way possible,” says Hinkle. “She also inspired me to be a more patient person, which has served me well as a parent, coach and teacher.  She inspires me to keep her legacy alive.”

“Miss Mapp is probably in every Hall of Fame out there for her contributions, but you would never know it,” says Windett. “She is so dignified and humble, even with all she accomplished. She could have been a successful coach at any school, at any level. The fact that she devoted her life to Bridgewater is really amazing. You don’t see coaches spending their entire career at one college. We were very fortunate to have her at BC.”

It is, perhaps, that dignity and humbleness that made Mapp’s influence all that much stronger and lasting. “Coach Mapp’s impact left ripples that continue to flow quietly outward,” sums up Hinkle. “I am honored to attempt to carry on the tradition of excellence she modeled for us all these years.”