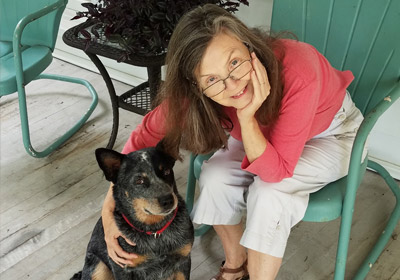 Sheila Turnage is the author of “Three Times Lucky,” which received a Newbery Honor in 2013,  “The Ghosts of Tupelo Landing,” “The Odds of Getting Even” and “The Law of Finders Keepers.”

Three Times Lucky is also an E.B. White Read-Aloud Honor book and an Edgar Award finalist. The book has been nominated for 19 state awards and has been published in eight languages.

Three Times Lucky is part of the Mo and Dale mystery series and features detectives Miss Moses LoBeau, a rising sixth-grader, and Mo’s best friend, Dale Earnhardt Johnson III. In addition to Three Times Lucky, the series includes The Ghosts of Tupelo Landing, also a New York Times bestseller; The Odds of Getting Even, winner of the AAUW-NC Juvenile Book Award in 2017; and The Law of Finders Keepers, an Okra Pick for best southern fiction by the Southern Independent Booksellers Alliance (SIBA).

Turnage is also the author of two nonfiction books, and of Trout the Magnificent, a picture book. She has written articles for Southern Living and American Legacy magazines and the Lincoln Center for the Performing Arts.

She earned a B.A. in anthropology from East Carolina University in Greenville, N.C.

This event is part of Bridgewater College’s Endowed Lectures Program and is sponsored by the Alison Yowell Pazmino Memorial Fund. The lecture is free and open to the public.