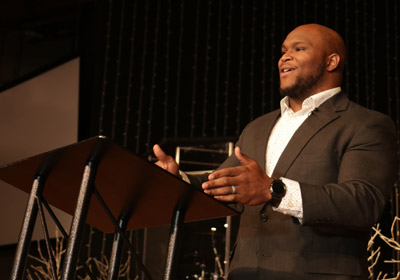 Chris Johnson ’05 has served as a connector of people, from the football field to the pulpit. His devotion to Christ led to the founding of Divine Unity Community Church, a multiethnic, multicultural place of worship.

Attending church was part of the fabric of Chris Johnson’s childhood. He says he “grew up in church,” which he considers an integral part of the African American culture in his small hometown of Ivor, Va., in the Tidewater area. Although a sense of religion and faith was imparted upon him from a young age, Johnson ’05 says it wasn’t until he attended Bridgewater College that he truly devoted his life to Christ and became fully committed to living out the tenets of Christianity.

Johnson had always been able to relate to different groups of people. He found himself in the middle, the person who helped everyone find common ground. Instead of attending a historically black college, he sought a place that would expose him to people from all backgrounds so that he could continue to grow his interpersonal skills (plus, he wanted to find a college where he could continue playing football). After visiting Bridgewater with his parents, he knew he had found the right place.

Johnson credits football Coach Michael Clark for being a big part of his formative years on campus. Fittingly, Johnson played nose guard for the Eagles. He was right in the middle of every play.

“I think my experience would be completely different if I was not on the football team,” Johnson said. “That culture held the excellence of what Bridgewater was, and it helped me dig a little bit deeper.”

But the place where Johnson perhaps felt the most at home was New Life Ministries, housed in a storefront in downtown Bridgewater. A fellow football team member and one of Johnson’s mentors, Henry Eggleston ’02, first introduced him to it, and he wound up attending services every Sunday with the late Charles Thomas.

By Johnson’s senior year, he had found friendship and fellowship with two more teammates, Derrick Burroughs ’06 and Troy Burnett ’06. One night while hanging out in Wampler Tower D, Johnson set an alarm on his phone to remind them to take a break at 9 p.m. for prayer time. For two hours they talked about their love for Christ, then went to IHOP to break their daylong fast. This gathering became a weekly tradition, and about a month later, 25 people showed up to Johnson’s apartment for fellowship. Thus, D.U.R.A.G. Ministries—Divine Unity Righteously Applying God—was born. After graduating in 2005 with a bachelor of health and exercise science, Johnson worked as a resident director on campus and hosted Bible studies in the basement of Heritage Hall. Word of the on-campus ministry spread quickly, and soon up to 50 college students from James Madison University, Mary Baldwin University and other area schools were attending. Two years later, Johnson followed the ministerial call to attend Eastern Mennonite Seminary. After obtaining his master of divinity, Johnson started looking at the area church community as a whole to see what was missing, to see where he could bridge a gap. What he envisioned was a multiethnic, multicultural, multigenerational church that attracted young and old, college students and families, people from a variety of backgrounds. A storefront opened up on Neff Avenue in Harrisonburg, and Johnson seized the opportunity for a place to once again host Bible studies, while continuing to do campus ministry.

On the first day of church service at Divine Unity Community Church (DUCC), Super Bowl Sunday in 2012, Johnson and his leadership team didn’t know what to expect. They were hoping for maybe 100 people. When the crowd numbered 240, Johnson knew there was momentum behind his vision. He just didn’t know how much yet.

“One of the most surprising things is the exponential growth,” Johnson said. “If someone would have told me in 2012 we would see 1,000 people [on a Sunday] in less than seven years I would have laughed at them.”

Getting from the point of 250 parishioners to 1,000 strong wasn’t without hurdles. The biggest learning curvefor Johnson was moving from passion to process. He was confident in leading people, but leading an organization from an administrative standpoint was new to him. He’d never done a budget sheet, never learned how to project and maximize a nonprofit’s finances. A key to his success was enlisting the help of skilled, passionate people, he said, especially his wife, Cherelle, and executive pastor A.J. Mosley, who helped tackle human resources and other legal requirements.

The average size of a church service in North America is 82 people. During Divine Unity’s first year they had already surpassed that with about 90 people on any given Sunday. The second and third years they broke the 200-person barrier. After seeing as many as 450 people at three services on one Sunday, Johnson and his team realized they needed a new home. The move to a large converted warehouse in January 2017 was a smart one. The congregation doubled in size in 18 months, attracting 750 people to worship.

“Our growth trajectory is surprising, and with it comes its challenges because we have to change our systems,” Johnson said. “Any good company has to change its system.”

That system is clearly working, as Divine Unity regularly attracts 1,000 people on an average Sunday, with 35 to 40 percent of its makeup being college students. Today the church is part of a larger network of churches based out of Nashville, Tenn., called Every Nation. Johnson preaches about 42 Sundays a year at his home base and travels to sister churches around the world to guest preach on the other Sundays. A large map on the wall of his office is adorned with red pins that show every place he’s traveled, including Israel, South Korea and Africa. He calls it a “local appointment with a global assignment.”

No matter the pulpit, Johnson’s message remains the same, as he once again acts as an intermediary by interpreting the word of God: “I want people to leave knowing that they’re loved, that there’s a plan for their life … and they have the opportunity to be who God created them to be.

“I know if they are strengthened and encouraged and loved it will change the world.”