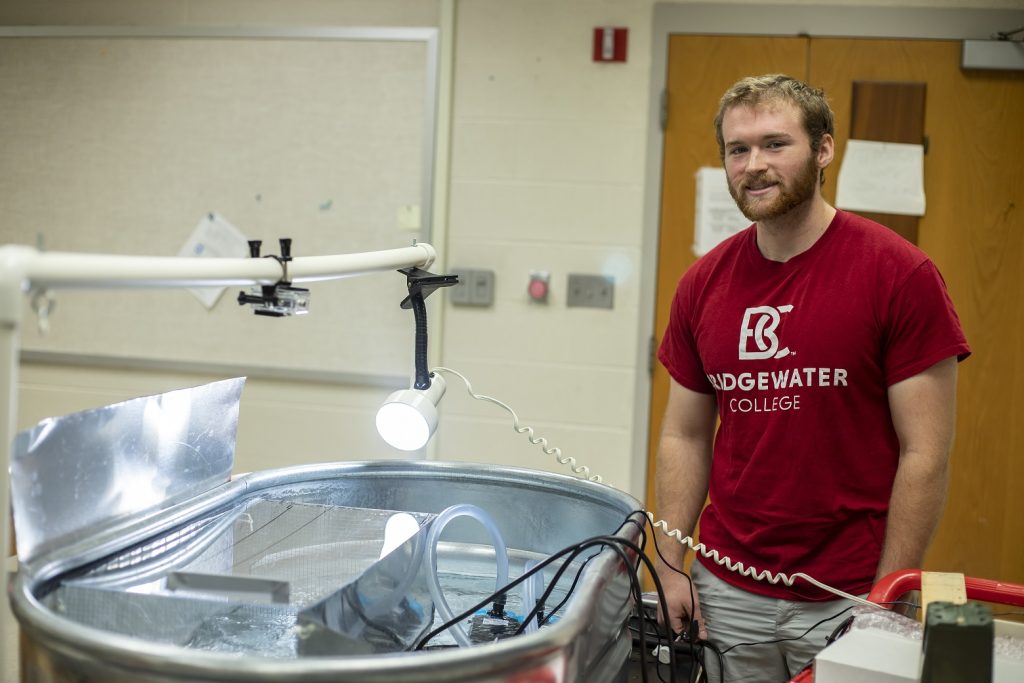 Faculty-student research pairs at Bridgewater College have spent their summer—quite literally—fishing around as they examined environmental pollutants’ impact on habitat selection of longnose dace, a freshwater minnow native to North America.

Ethan Moses, a junior environmental science major, and Associate Professor of Biology and Environmental Science Dr. Kimberly Bolyard are working alongside each other to test water flow and current preference of longnose dace. The duo’s summer research also coincides with senior biology major Alison Keister’s exploration into the impact of environmental pollution on longnose dace, also under the mentorship of Bolyard. Both research initiatives were funded by the Dr. John W. Martin Summer Science Research Institute at BC.

“The project is about how agricultural pollutants, specifically pollutants from runoff and from pastureland where cows or goats live, may get into the streams and can affect fish behavior. It’s not what they naturally live in, and it (the runoff) can introduce contaminants,” Moses said.

To study the pollutants, fish behavior and water flow and current preference of longnose dace, Bolyard, Moses and Keister traveled to local streams, such as Back Creek in Augusta County, to collect the fish. The researchers were helped by Associate Professor of Biology and Environmental Science Dr. Tamara Johnstone-Yellin‘s ecology students, who also learned how to collect and identify fish during the process.

Moses, an avid fisherman himself, built a fish tank out of a horse trough that he designed for water flow and current-preference testing. Using various water pumps, the test tank features a fast portion of water and a part with no flow, which allows fish the ability to choose between the two sections.

“We’re trying to see if fish from rivers with different pollution levels behave differently in their selection between those two,” Moses said. “There have been studies on their current preference before, and usually they prefer faster water because they like [high levels of] dissolved oxygen. It’s also a place where they can find food coming down in the current.”

Fish that come from a more polluted stream may spend more time in slower flow or less current because they are physiologically weakened from the pollutants in the stream, Bolyard explains.

“One of the ideas is that long-term exposure to chemical pollutants in the environment is going to change their physiology and that’s going to put a strain and stress on an individual fish. It might lead them to make non-optimal choices, so it might be that they should be in the fast-flowing water but they’re unable to sustain the muscles or the swimming that it requires to stay in the fast flow,” Bolyard said.

To examine substrate preference, or the surface on which an organism lives, Keister created a simulated riverbed in an aquarium that features one half with large cobble and one half with smaller rocks.

If the hypotheses from both research projects hold true, the trio expects to see a difference in how longnose dace respond in their respective test tanks depending on if they were collected from a clean waterway versus a polluted waterway.

Bolyard will take the summer research projects a step further this fall. While on sabbatical, she will analyze the physiology of the 40 longnose dace the researchers collected for the behavioral studies.

Findings, analysis and data from both summer research projects will be made publicly available during the College’s Celebration of the Arts, Scholarship, Performance, Innovation and Research Excellence (ASPIRE) in spring 2023.