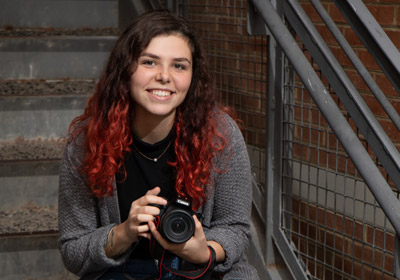 Courtney Hawkins ’19 says studying abroad in Morocco was “life-changing.” Traveling to a foreign country fostered a renewed sense of independence and allowed her to find her voice.

Courtney Hawkins ’19 found her voice in her first-year seminar with philosophy and religion professor Dr. Nancy Klancher. The class that studied spiritual autobiographies had religion at its heart, which Hawkins said can be a divisive topic for some people. Bridgewater College’s encouragement of civil discourse, however, allowed Hawkins to feel comfortable dialoguing with her peers.

“It was the first time I could share what I thought and hear other people’s opinions without it turning into a heated debate,” Hawkins said. “You didn’t have to be correct, you just had to be open to listening.”

Hawkins first learned about Bridgewater College at a Church of the Brethren gathering; it was there that she met Jenna Walmer, who would later become her roommate for all four years at BC (as well as a fellow Flory Honors student). Walmer told Hawkins about BC—the place she had wanted to attend college since she was a freshman in high school. A first-generation college student, Hawkins originally thought she wanted to go to a large school like the University of Virginia, which would be a big departure from the small southern Virginia town where she grew up. Though when she visited Bridgewater, she realized the advantages a smaller class size offered, along with the opportunity to forge relationships with professors. Bridgewater was the only college Hawkins applied to, but before she sent in her application, she made sure it had her top requirement: great study abroad opportunities.

As a first-year student, Hawkins took Arabic I and II after reading about the classes in a Welcome Week flier (she had always been interested in other cultures and religions). After her first year at Bridgewater, she knew she wanted to continue studying the language, thus her decision to study abroad in Morocco the fall semester of her junior year. The experience, she said, was “life-changing.”

“I started to find my voice here at Bridgewater, but I didn’t feel confident in that until I studied abroad,” she said. “I got to be independent, thrown into a culture that was really different, all these new people. … It’s hard to describe sometimes how great it was for me.”

Hawkins continued her interfaith studies in Morocco, in addition to participating in service-learning by teaching Moroccan students English. She has changed her major several times — at one point, she wanted to be a social worker—but a theme emerges from all of her choices: her passion for helping people. Hawkins will graduate this spring as an art and philosophy and religion double major, with a concentration in digital media and a minor in peace studies. Photography, she said, can be a way of bringing a community together—not only taking a closer look at the way someone lives, but also how he or she views the world.

And the world continues to be a fascinating subject for Hawkins, who also participated in the inaugural May term study abroad program in Oxford, England, last year.

“Morocco seemed to be more helpful for me as a person and developing my social skills, but Oxford was academically intensive,” she says.

After graduation, Hawkins plans to join the Peace Corps and will request an assignment in Morocco, the country with which she fell in love.

“The one thing I really think studying abroad gave me was the confidence and belief that I can actually do something to help this world,” Hawkins said. “I wanted to do that before, but I never thought I would really be helpful for other people. After that trip, I realized I have things to add to this world.”